By Jean - July 11, 2016
It was time for us to leave London, so we packed up and took the Tube to Liverpool Station, where we caught a train to Cambridge.  It was quite a nice train trip, through pretty country and lots of tiny places named odd things like Stanstead Mountfitchet or Ugley.  It was a sunny, warm day, and by my standards, very muggy indeed, so that what I would normally consider beautifully cool temperatures of 75 degrees became too warm.  I could not deal with that humidity.  But we walked from the station to the car rental, and picked up this absolutely terrifying Mercedes sedan.  We'd originally asked for an economy car, but they said we'd never fit four people and luggage inside (I'm sure they were right), and gave us the sedan, which was quite large by British standards.  I think it might have been a little larger than my own Honda CRV, even.  It was the fanciest car I've ever been in in my life.

Happily, this fancy car was an automatic; most Brits drive stick shifts, but the thought of mastering changing gears with my left hand as well as all the other things was too much.  It also had GPS, which they call SatNav, and it was fabulous.  We promptly named her Fiona, and it was wonderful to be able to enter a destination and have her tell us what to do...though sometimes her ideas about the most direct route were a little odd.

My mom tried driving first, but pretty soon she decided it was easier to tell me what to do, and I did all the driving after that.  She would warn me if I was drifting too far left, which I did a lot in the first few days, and so on.  It was a great help to have another pair of eyes on the road.

Our plan was to check in to our B&B and then drive out to Ely to see the cathedral, which was not very direct, but we didn't want to try to find the B&B in the dark if we were out late.  So first we drove to the village of Hemingford Abbots, which name would seem impossible to live up to.  To American eyes, at least, it turned out to be an impossibly lovely village, with nice houses (half of which were thatched), winding lanes, and a general air of idyll.  Our B&B was named Riverside, and it was the only B&B we stayed in--it was our splurge, and more than worth it.  It really was at the riverside, the owners were lovely, and the whole thing was just like something out of The Wind in the Willows, or (more accurately) The River at Green Knowe.  My girls were thrilled--well, we all were!


After checking in, we drove out to Ely on a nice freeway.  Parking was tricky; our car was large enough that it didn't really quite fit into the average British parking spot.  I spent a lot of time looking for large parking spots, preferably in a corner, with nobody nearby for me to scrape.

We walked over to the cathedral, and I was eager to go in--but it was now 3pm, we'd had no lunch, and the girls threatened to revolt if we didn't feed them, so we got sandwiches at a shop, and a good thing too, because Ely is a demanding place. 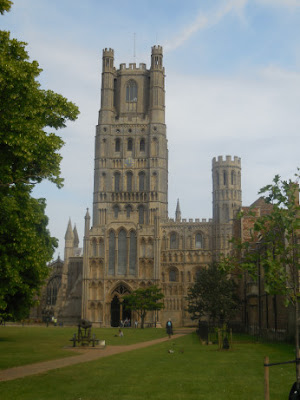 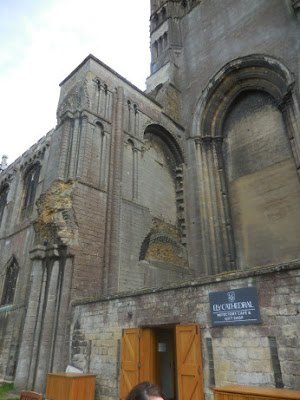 The cathedral is amazing and glorious, with Norman, Gothic, and late Victorian bits.  If you look at the photos, you can see Norman arches, the later Gothic arches in the central area, and then the glass and painting is mostly Victorian.  The original Norman tower fell down fairly early on, so they built the Lantern--an octagonal tower.  We caught the last tour up the Lantern, which was run by a very nice guy with a pure Cockney accent, which made us wonder about his story.  It was a fairly scary venture--very high, with tiny narrow spiral stairs--and it went in stages, from a gallery to the roof up to the inside of the tower, way up to the outside top of the tower.  There were once bells above, but they were too heavy and are gone now.  There is only the extremely narrow ladder up to the bell chamber. 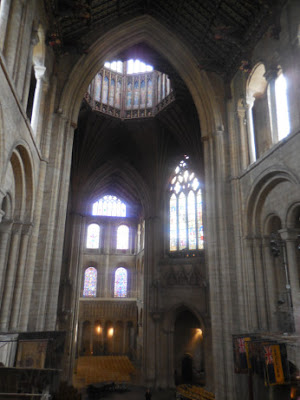 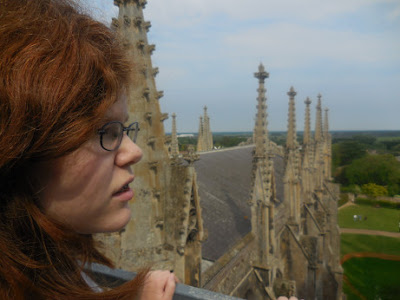 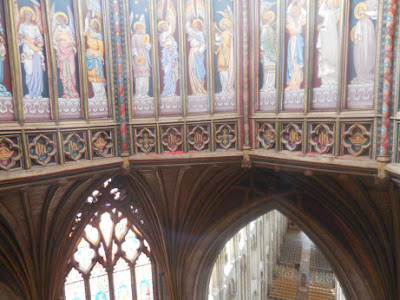 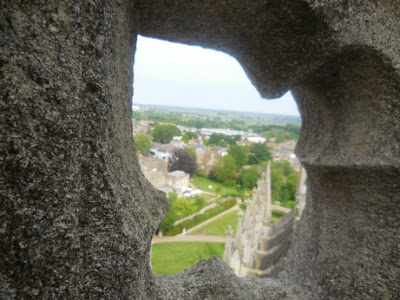 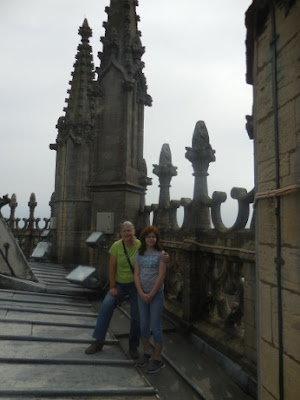 We wandered around the rest of the cathedral and took a look at the Stained Glass Museum that they keep on one side.  Evensong was about to start, and Mom and I almost attended, but we felt guilty about leaving the girls to wander around on their own with no food, so instead we walked around the ancient, idyllic, lovely outside.  We entered again through a side door and thought we were going to be run over by the choirboys leaving the service, but luckily they turned.  For the last 20 minutes of the time, we looked at the extremely fancy altar and quire, and the unusually massive Lady Chapel, covered with Gothic ornamentation but with all the zillion saints smashed or gone, thanks to Cromwell.  Ely is Cromwell's hometown, and we saw his house, but that was closed by then. 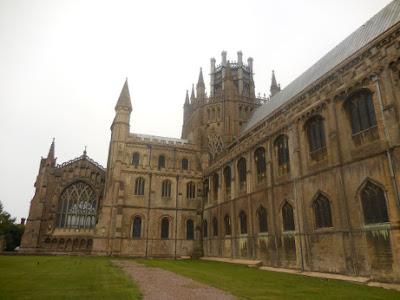 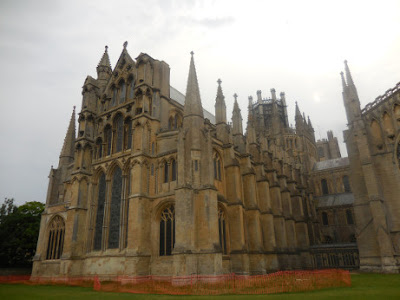 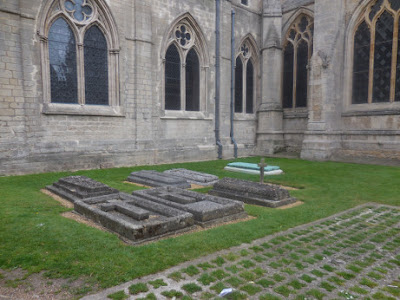 By the time we got out, in fact, everything was shut down.  Most of the High Street was empty!  We finally found a little cafe open, which was closing in about 15 minutes but willing to cook us something for takeaway.  So we got fish and chips and ate on a bench by the cathedral.  Then we wandered around the town for a little while before driving home by a very scenic route, thanks to Fiona.  We looked a little at the river, but it was getting dark by then.