The Patchworks of Lucy Boston 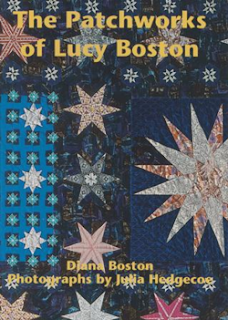 The Patchworks of Lucy Boston, by Diana Boston, photos by Julia Hedgecoe

I found out about the patchworks several years ago, and have wanted this book for a long time, but it's not easy to get in the US.  When we planned the UK trip and the visit to the Manor, I promised myself that I would get this book!

I'm really glad I got to see the pieces in real life, though; one thing I found was that the photos can't really do justice to them.  They are very complex and technically proficient, with a precision that would impress any quilter.  Lucy carefully cut her fabrics and matched patterns to create new patterns across her blocks--this is called fussy cutting--and she took it to a level that is rarely seen.

She was sewing with whatever fabrics were available to her.  Like modern quilters, she went out and picked fabrics to use in her patchworks, but she did not have the variety of quilting-specific fabrics that we have.  And she started during World War II, using whatever leftovers there were.  One early patchwork had a lot of dustcloth fabric in it, which was not rationed.  I also saw corduroy, embossed fabrics, and striped ticking.


It seems like the older she got, the more ambitious she became.  In her 80s, she was piecing complex block and inventing patterns that quite frankly intimidate the heck out of me.  She was over 80 when she tackled a whole lot of Lone Star blocks.  She made a Kaleidoscope pattern.  She did one of tesselating Islamic tiles at the age of 92!

The book has photos of each of Lucy's patchworks (except one or two that are no longer known), arranged in chronological order.  Each piece has a description by Diana, in which she talks about the artistic effects and feelings evoked by the quilt, a photo of the whole patchwork, and a detail photo.  Not all of the pieces pictured are on display at the Manor, since quite a few belong to other people, so I was happy to get to see those.  I wished for more detail photos, especially of the more complex quilts.


It's a stunning book because the patchworks are stunning.  Somebody could do a giant scholarly book on these and it would be great. 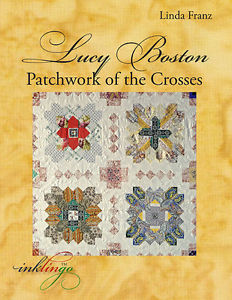 On to the next part of our story!  I got the book, I saw the quilts, and I was happy.  Now, I already had a quilt pattern book that features the Patchwork of the Crosses (known as POTC for obvious reasons).  I bought it a year or so ago when I discovered that the woman who did a really good Jane Austen quilt pattern had also done POTC!  I think there's a niche here for literary quilts; I'd buy those books.  As far as I can tell, Lucy invented this pattern of elongated hexagons herself, and it's starting to become known more widely.   (Patchwork of the Crosses, by Linda Franz) 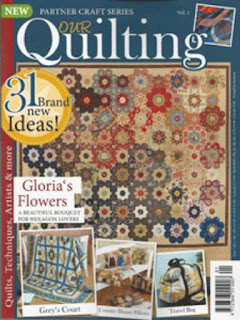 Just a week or so after we got home, my husband and I went out on a date and wound up at the bookstore.  I wasn't finding too much to look at, and he suggested I go look at the sewing magazines--I do sometimes, but I don't read too many quilting magazines any more.  They are too much the same.  But the cover of one caught my eye; I thought it had hexagons so I grabbed it to look at.  Then I realized that it was not a hexagon quilt at all--it was octagons placed around pentagons.  Whoa, that's some fancy piecing there.  Looking more closely, I thought that this was a quilt Lucy might have invented; the fussy cutting, the intricate design, it was all there.  I found out that the designer of the quilt (called Gloria's Flowers) is in fact a big Lucy Boston fan, and has made more than one POTC--one at half-size.  And the cover of the next issue of this magazine was going to feature a POTC.  All of a sudden, Lucy Boston was everywhere! 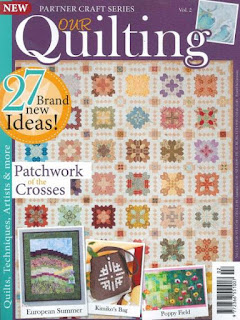 This is a new magazine called Our Quilting by Partner Craft, and it's actually German.  There is not yet a way to subscribe in the US, but you can buy issues at JoAnn and Barnes & Noble.  They don't seem to have a website either.  They ain't cheap, but it's an excellent magazine, far better than most.  They do assume a certain level of expertise; the instructions are pretty minimal.  But you can bet that someday, I want to piece a Gloria's Flowers.  After I do a POTC.