By Jean - July 27, 2016
Stonehenge is a really big deal and we knew it would be packed, so we got there as soon as we could.  By fifteen minutes after opening time, the parking lot was about a quarter full and a giant bus was pulling in.  Now, if you have ever visited Stonehenge, but it was more than a couple of years ago, it's all very different now.  They've built a new visitor's center, and they re-routed one of the roads that ran by.  I must say it is excellent.

The new visitor's center is a good mile away from Stonehenge itself, and is not visible from the monument.  You can hop onto a shuttle bus, or walk, or you can take the bus and get dropped off halfway.  We wanted to walk, but we also wanted to beat the crowd as much as possible, so we opted to get off halfway and walk on the path, across some fields and by some barrows, to get there.  It was really fun; we were tromping through fields with cows and barrows!  It wasn't possible to do this before, because the two roads made it impossible.  It's really neat to walk up and see Stonehenge getting larger and nearer as you hike. 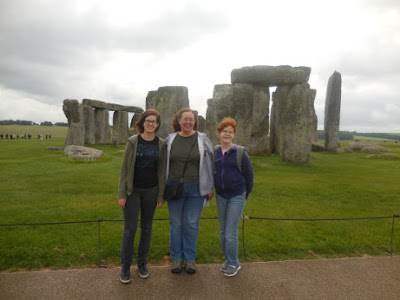 Stonehenge is something else.  It's just gigantic.  We spent a good hour standing around, slowly walking around the circle, and just looking.  We noted the little extra mounds and stones, spotted the Avenue (which is much easier to see now), and looked at the Heel Stone and so on.  There were already plenty of people when we got there, but it was nothing compared to when we left an hour later!

Early on, we met a security guy who spotted a Doctor Who t-shirt in our group and told us about the time the Doctor came to Stonehenge.  They'd had to set up a large extra papier-mache stone for the Doctor to stand on, and he claimed that when they took it down and carried it away, somebody snapped a picture that could be found on conspiracy sites on the Internet, claiming that 'they're moving Stonehenge!'  I was unable to find any such picture, but there's an awful lot about Stonehenge on the Internet, so that maybe is not a surprise.  It was a fun story, anyway! 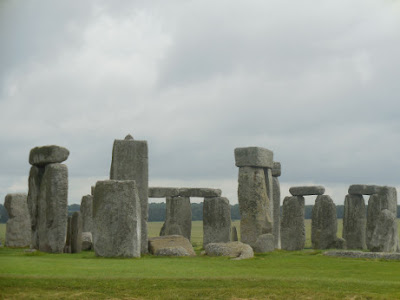 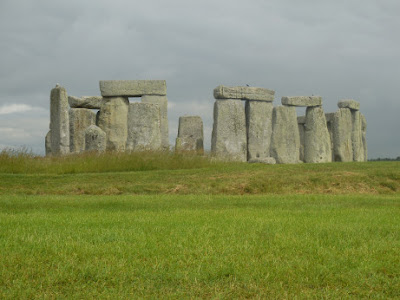 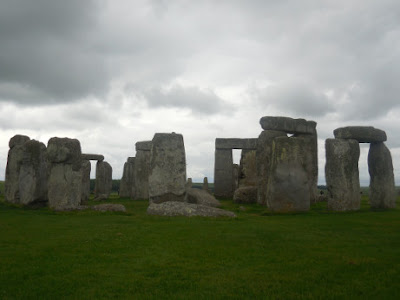 We walked all the way back to the Visitor's Center and it was great.  There's a sort of nature walk that goes through the woods and fields, with more barrows and a lot of flowers too.  I think the gate to it is a little hard to spot if you are walking from the Center to Stonehenge; there were lots of people by now but they were all walking on the paved road that the shuttlebus used, and we were the only people on this nice little trail!

The Center is really good too.  There's a large exhibit of the various stages of construction and artifacts found on the site.  To the side, you can watch several different videos of archaeologists detailing their theories--there were at least two differing interpretations, and a lot of "it wasn't the Druids! Forget the Druids already!"--and some other interesting topics.  There's a kind of goofy room with a video showing Stonehenge Through Time on the walls.  There is a fabulous little exhibit of Stonehenge in pop culture, starting with Victorian souvenirs and running through comic books and all sorts of fun things.  And outside, there are several huts showing how they think people lived, and a large sarsen stone you can touch.

There was an odd lady near the archaeological exhibit in a corner.  My kids were confused as to whether she was a re-enactor, or what, but she turned out to be a sort of...Druid lady, I guess.  She was dressed in robes and wore antlers and a flower wreath on her head, and she had a staff with a carved goat head on it.  She was using this goat head as a sort of spirit guide maybe, instructing a tourist fellow to look into the goat's eyes and talk with him.

The gift shop was an experience as well, huge and crowded.  You can buy just about anything with Stonehenge on it, and though normally I don't go for things like that, it was fun too.  We decided that there must be a Stonehenge chess set somewhere, and searched for one, but there wasn't, so you can't get quite 'anything.'  I did buy myself a neat bookmark, and I finally got one of the stuffed and embroidered Christmas ornaments that every gift shop carries.  I fell for it because on the back, there's a (completely inaccurate) map of the stones embroidered in beads!  Ha!

By the time we left, it was nearly lunchtime, so we got some more sandwiches at the same grocery store and drove out to Old Sarum again.  To our surprise, it was nearly empty.  So if you are ever around Salisbury, make sure to visit Old Sarum, because it's fantastic, one of my favorite places ever, and hardly anybody goes there.  Something about it just makes me really happy.  And I finally got to go inside!

The central ringfort turned out to be medieval; I had thought that William the Conqueror found it like that and built a castle on it, but it turns out that he had the inner ring built.  It's quite deep and high, and once held a small but complete castle complex, which is now in ruins.  It was never very well maintained, but Henry II did some work on it and kept Eleanor of Aquitaine imprisoned there for a while.  King John pretty much abandoned it, and the cathedral moved, and it slowly fell apart and became less and less used.  Old Sarum kept on as a rotten borough for centuries, though!

We had a great time just walking around, looking at the ruins, and enjoying all the green space and open air. 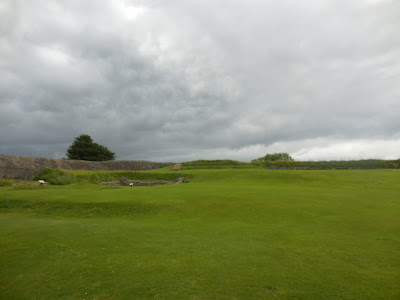 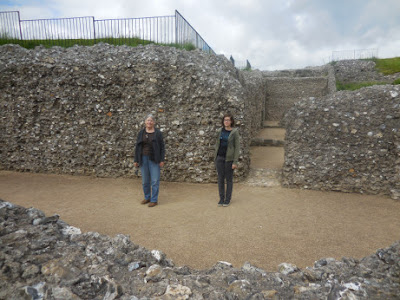 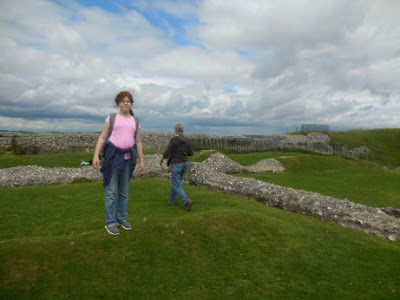 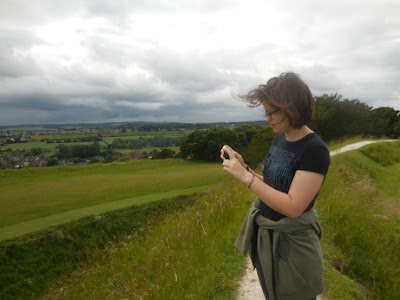 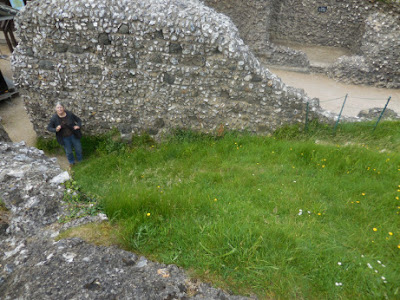 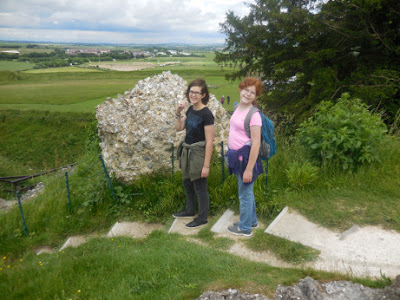 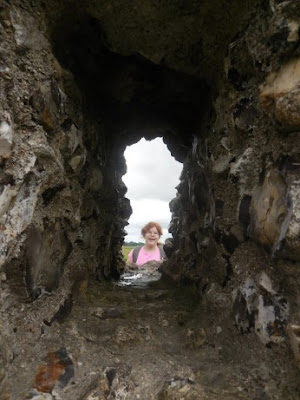 With the help of Fiona, we drove into the center of Salisbury and parked in a lot close to the cathedral.  It was a pleasant walk over a bridge and along some streets.  We wanted to see the Magna Carta first, since it would close earlier than the rest of the building.  It's the best-preserved copy of the Magna Carta in existence, and now has quite a fancy display to itself in the chapter house, with its own personal tent keeping it nice and dim.  Much of the rest of the display was art by local schoolchildren.  It's truly beautifully preserved, and we studied it closely for a little while.  My 15-year-old wished she could read Latin, and we could figure out a few words in the tiny, perfect calligraphy.  Then we walked through the cloisters to the rest of the church. 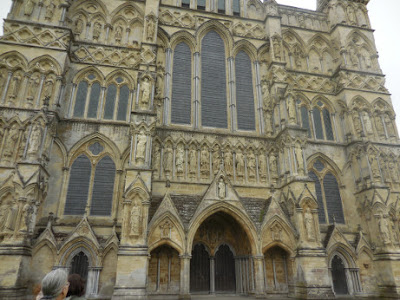 We wandered around the cathedral.   There was a lot of excellent embroidery!  The quire is supposed to be the oldest in England, dating from the 1200s when the cathedral was built.  We even saw some memorials that had been in the Old Sarum cathedral and moved to the new building.  I was pretty surprised to learn that the place was built in only 38 years (excluding the spire, which came later).  That is incredibly fast.  Salisbury is also the home of the world's oldest mechanical clock, which is still ticking away, and that was a big attraction for us. 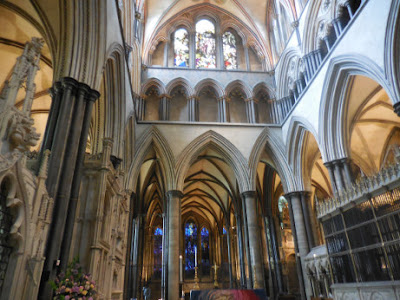 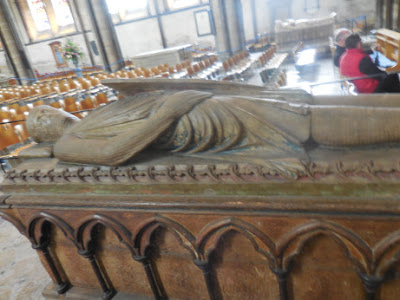 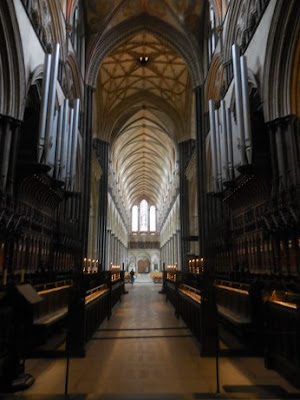 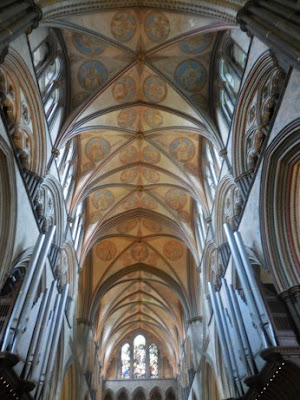 There was an art exhibit installed throughout the cathedral and on the grounds as well.  Everywhere we looked, there were these sculptures of rabbit people--human figures with rabbit heads.  Or sometimes a horse, and outside there were some giant sleepy feet and a hand or two.  This was the work of sculptor Sophie Ryder. 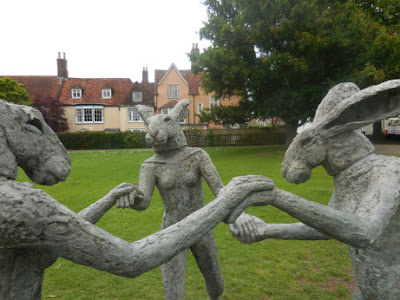 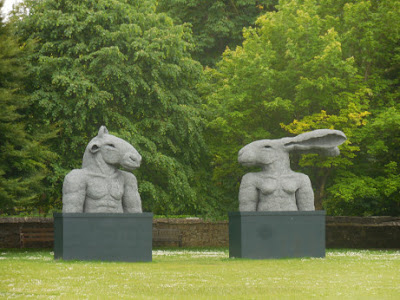 Then as we were about to leave, we saw a giant handpainted wall map, done in calligraphy and painted figures.  It's a map of the various dioceses in that part of England, and also showed cities and landmarks.  Since it was marked by church geography, it was a little difficult to make sense of it, and we had fun figuring it out.  It looked completely new and modern, and we were surprised to find out that it dates from the 1950s, from a major anniversary of the cathedral.  Either way, it was a beautiful map.

We had not expected to be able to do so much in this day, and so we had to think up a new plan for our final day in England.  It turned out to be great!  Stay tuned.
UK trip!