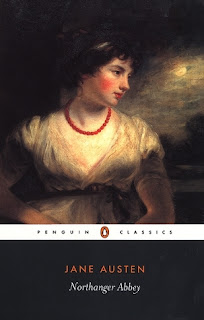 
I did almost no reading at all on our trip, because I was running around all the time.  I also drove a rental car for a week--successfully--and I have to say, British drivers must all have nerves of steel, especially the bus drivers.  None of us could relax and read; all four of us had our eyes on the road the whole time.  Since we were going to Bath, of course I had to re-read Northanger Abbey, and my 15-year-old daughter read it too.

You know the story, probably--17-year-old Catherine, of middling looks, unremarkable parentage, and small fortune, is taken to Bath by friends and has her adventures.  She's a Gothic novel fan and tends to take them a bit too seriously...

This was such a fun read.  I love Catherine.  She is so naive that she could never exist today (Austen is poking a little fun at her innocence anyway).  She just doesn't have the tools, at first, to know how to take the Thorpe siblings...but then neither does her more experienced brother James, and they both learn.

It was also really fun to read the story while visitng Bath!  We went to the Pump Room, which is currently filled with a posh restaurant, and we tried the water, which comes out of a fishy fountain.  It's warm and smells like eggs, and it doesn't taste too great.  We also visited the Assembly Rooms and imagined Catherine dancing with Mr. Tilney in a crowded ballroom while the older folks play cards in the Octagon Room (more on the Assembly Rooms later!).  Our bus dropped us off right on Milsom Street where the Tilneys lodged.


So I enjoyed the novel, as I always do, and I especially had a lovely time in Bath, imagining Catherine and Isabella parading up and down in the Pump Room.