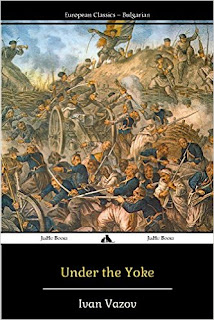 Under the Yoke, by Ivan Vazov

Remember a while back I said I would participate in My Two Stotinki's June Bulgarian Literature event?  Well, I did!  I read Under the Yoke, which is the great novel of the Bulgarian independence movement.  MTS said:


the most famous classical work in Bulgarian and the first Bulgarian novel, written 1888 and based on Vazov’s own experience and historical events related to the so-called April uprising against the Ottoman rule. Full of action and romanticism, a story that is still read by almost every Bulgarian (usually at school) and that is therefore having a great influence on how Bulgarians see their own history (and themselves).

So that seemed like a good place to start if I was going to try Bulgarian literature out--plus it was easy to download on Kindle, which was a big plus.  MTS also suggested several other intriguing-sounding titles, and I'm hoping to get to read some of them in future.  Some few are already on their way to me, but we all know my TBR pile is bigger than my house at this point, so it might be a while.

Under the Yoke is the story of a hero of the Bulgarian struggle for independence from the Ottoman Empire, and of his friends and comrades, and his true love, and the village Byala Cherkva (White Church) where he stays.  It's very romantic and 19th century in tone.

Ivan Kralich, revolutionary, has escaped from prison and takes shelter in Byala Cherkva, changing his name to Boicho Ognyanov and donning a disguise.  From there he plots with others to stage a real revolution, meanwhile avoiding the Turkish authorities and falling in love with a young orphan girl.  We get to know a lot of people in the village, and when the revolution finally comes, we see the whole noble endeavor fall apart.

Vazov's story is based on the actual April Uprising of 1876, which Vazov was part of, and which did fail for the same reasons as in the story.  Byala Chervka is his own hometown of Sopot.

Boicho is a real 19th-century romantic hero.  He is brave, dashing, and self-sacrificingly honest and noble.  I was interested to see that he is not a Socialist, as you might expect of a late 19th-century Eastern European revolutionary.  He says right out that he wants Bulgarian independence and self-determination, and is not in favor of Socialism:


You must bear in mind, Mr. Kandoff, that through the nation we can attain only one rational and possible object — that is, the destruction of the Turkish rule. We see before us only one enemy — the Turk ; and it is against that enemy that we will rise. As for the principles of Socialism to which you have treated us, we cannot stomach them. Bulgarian common sense rejects them, and they will never find a field in Bulgaria, either now or at any other time. Your high-sounding principles and standards of 'modern thinking humanity and the sober science of reason' only serve to confuse the subject. What we have to do is to protect our homes, our honour, our lives from the lowest zaptie who may choose to assail them. Before solving general problems of social science — or, more correctly, obscure theories — we must free ourselves from our chains. Those writers whose teachings you have mastered neither know nor care about us and our sufferings. We can rely only upon the nation, in which we cannot but include the Chorbaji class and the clergy: they represent forces which we must make use of.


...with all its hardships bondage has yet this one advantage: it makes a nation merry. Where the arena of political and scientific activity is closely barred, where the desire of rapid enrichment finds no stimulant, and far-reaching ambition has no scope for its development, the community squanders its energy on the trivial and personal cares of its daily life, and seeks relief and recreation in simple and easily obtainable material enjoyment. A flask of wine sipped beneath the cool shade of the willows by some clear murmuring rivulet will make one forget one's slavery;

In vain would certain writers, blinded by party spirit, seek to claim a monopoly of patriotic ardour only for the sheep-skin clad and shod peasant, in defiance of historical truth. No, the revolutionary spirit, like a flaming seraph, spread its wings over peasant and university student — kalpak and fez, priest's cap and tall hat alike. As in all the progressive struggles of Bulgaria, science and the cross were in the front rank. The martyrology of modem Bulgarian history pro- claims this truth. True, the principal contingent, as at all times, was furnished by the mass of the people. But it gave what it could — that is, numbers. Thought and soul could only be supplied by the intelligentsia. So the effervescence increased daily and spread over everything.


I read most of this book on airplanes and while in the UK, and I quite enjoyed it.  Also, there are actual bashi-bazouks in it!  (I found out that bashi-bazouks were irregular soldiers in the Turkish army; that is, they were fed, but otherwise not paid, because they were expected to live on looting.  They were notoriously ill-disciplined and brutal.)  And they make a cannon out of a cherry tree log bound with iron--it fails.


In other news, I'm still going to write about my trip.  I have 6 or 7 books saved up to write about too, so I thought I'd better do at least one.  Last weekend I intended to write a lot and get my neglected house under control, so instead I took my older daughter down to a friend's for the weekend to help them move.  Then I worked very hard all week, which I enjoyed but which also took all of my energy, and now I am quite happy to be able to start my summer vacation!