By Jean - July 12, 2016
At the hotel in London, we'd had toast and muesli every morning, which was pretty good really; it brought me back to days in Denmark and I put pink yogurt on my muesli every morning, and cheese and jam on my toast.  But I think we were all pretty thrilled to have something new for breakfast, and the full English treatment at our B&B was pretty fabulous.  After looking at the river some more, we drove out to a park and ride south of Cambridge. 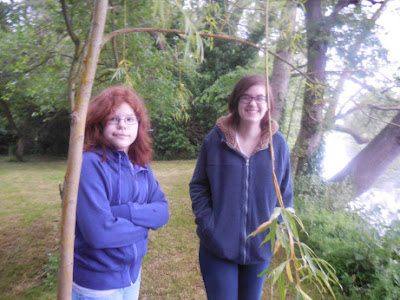 Park and rides are genius.  I couldn't believe how great they were.  They're run slightly differently in different cities, but there's always a giant parking lot with plenty of space, double-decker buses running into the city centre every 10 to 15 minutes, and it costs just a few pounds.  Completely wonderful.  And my 13-year-old finally got to live her dream of riding a double-decker bus.  She would sit right in front, which makes you feel like you're going to topple over any second. 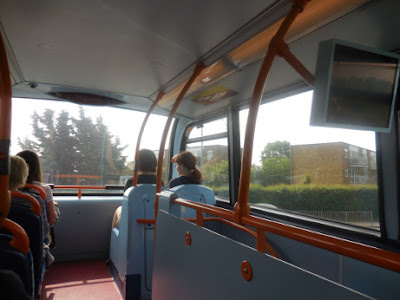 In Cambridge it took us a little while to figure things out.  The information center was hard to find, and then it wasn't very helpful; a decent map was hard to come by.  There are colleges scattered all over the place, but a lot of the most famous ones are lined up in front of the river Cam.  We got there and discovered that just about all the colleges were closed because it was finals week and everybody was taking exams!  Aw, that was a disappointment.  But we could still look at a whole lot of stuff. 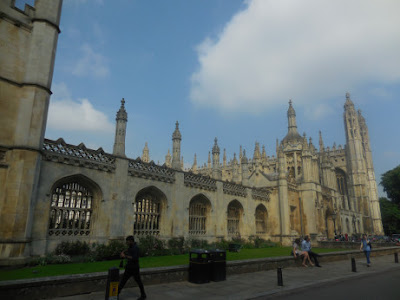 Cambridge is stuffed full of people on bicycles, by the way, which are by far the best way to get around town.  Oh, to be a Cambridge student on a bicycle!  It looks like a pretty good life.

There is a whole industry of people trying to sell tourists a river tour for large amounts of money.  Since we couldn't go in the colleges, and they offered a deal, we wound up doing that.  I've always wanted to punt on the Cam--who doesn't?--and so we did.  The scenery was lovely and we got to see a lot of colleges and bridges we couldn't have seen from the other side.  It was awfully sunny, and I needed a hat!  The punter fellow gave a running lecture as he shoved us along, telling interesting and extremely dubious stories about events in the histories of the various colleges.  Being such a nice day, the river was crowded with punts.  Our guy was quite good at the punting, unlike some of the kids on the river who had rented boats, and I was pretty sure a couple of them were going to fall in soon. 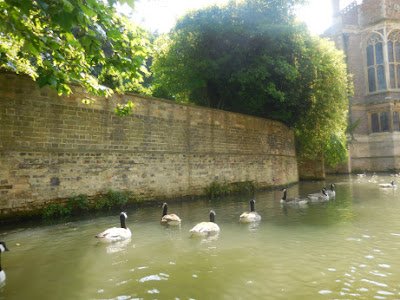 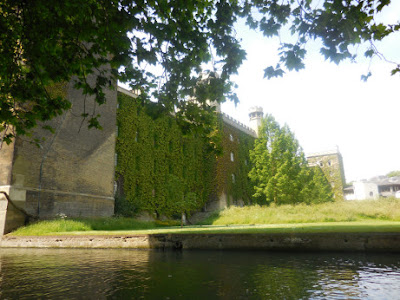 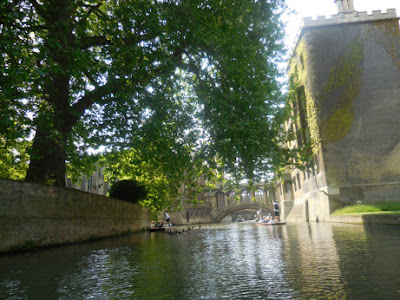 After the punting tour, we walked around and looked at things some more.  At Trinity College, my mom claimed that Henry VIII's scepter was really a chair leg, because the original scepter had been stolen about 100 years ago and the chair leg fit so they left it there.  I wasn't sure I believed this story, but it sure did look like a chair leg, so I went up and asked the porter guarding the gate.  He said that sure enough, it was a chair leg, and as you can see my zoom function proved it! 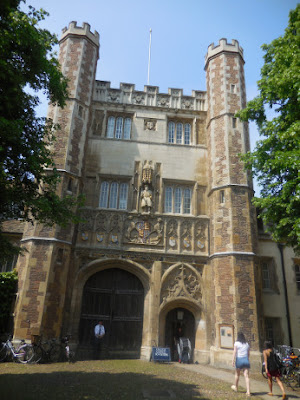 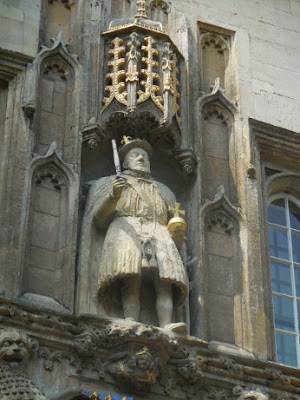 We then found Great St. Mary's Church, which was a welcome respite from the heat.  So lovely and cool it was, and also it had fun animals carved into the rim of every pew.  We climbed up the tower, which was well worth it just for the breeze at the top!  It also had a wonderful view, and bells--so we could see the bell-ringing chamber and the bells themselves on the way up.  It was just like The Nine Tailors or something, with memorial plaques of special bell-ringing events on the walls. 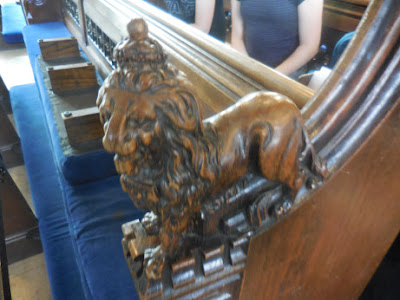 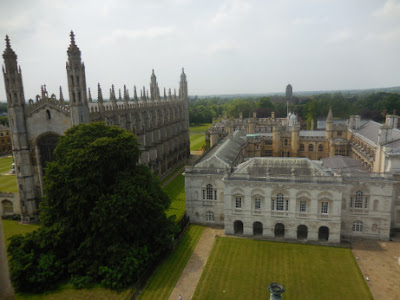 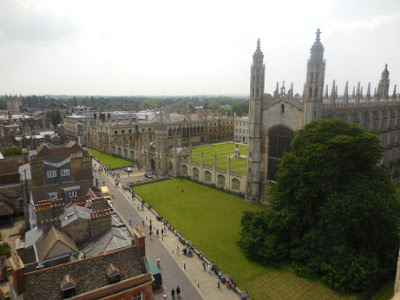 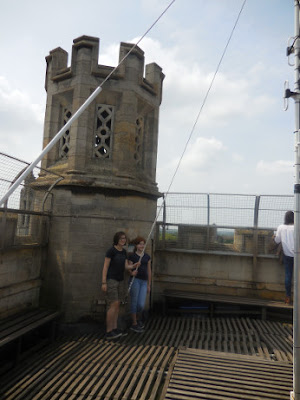 We had a small lunch in a cafe in the crypt of a different church--in my case, this mostly consisted of many glasses of cold water.

King's College Chapel was still accessible to the public, and that was something I'd really wanted to see.  It was started by Henry VI but stalled during the Wars of the Roses, and was finally finished by Henrys VII and VIII.  It's supposed to be a church, but the main impression I got was of Tudor vanity.  Every possible surface is covered in Tudor roses, greyhounds, Welsh dragons, portcullises, and other insignia.  They are all a bit different, having been carved by different craftsmen. I got tired of it fast!  Otherwise, it's a very beautiful building.  The stained glass is old and very impressive indeed.  Much of the center part of the building could not be seen, since there's a big organ renovation going on.

We then walked to the Fitzwilliam Museum, but what we had meant to do was go to a museum of the history of science.  Unfortunately it was just about the end of the day by then, but we managed to get into a museum about earth science that was pretty neat.  It had a gazillion fossils arranged in chronological order, and a display about Darwin.  I happened to take a seat next to a display of sand-dollar like fossils that, I'm pretty sure, were the 'shepherd's crowns' that featured in Pterry's last book.

The bus ride back was long and hot, but after dinner it was cooler and we took a beautiful walk down the lane to a public footpath across the river and to an old mill that still operates on weekends.  There was a lock, too!  I've never seen a lock before.  And there were two swans with their cygnets!   We didn't get too close, but we did take some pictures.