By Jean - July 02, 2016
I can't believe the year is half over.  As my kids get bigger, I get busier, and life is now speeding by faster than ever.  You wouldn't think that two teenagers could take up more time than two tiny kids, but apparently they do?  Maybe it's that they don't nap?  I dunno.  Anyway, it's time for Bev's quarterly TBR checkpoint! 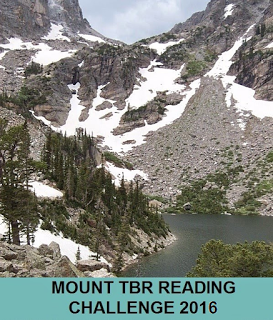 So far I've read 12 titles out of my goal of 12, so I have reached Pike's Peak, and I shall now officially upgrade to the Mont Blanc level of 24 books.  On the other hand, it's been a little while since I touched that pile!  Oh dear.  (On the gripping hand, I've been gone and haven't read much of anything lately!  Yeah, that's it.)

Use titles from your list to complete as many of the following sentences below as you can.  If you haven't read enough books to give you good choices, then feel free to use any books yet to be read from your piles. I've given my answers as examples. Feel free to add or change words (such as "a" or "the" or others that clarify) as needed.
My Life According to Books
1. My Ex is/was The Umbrella Man, by Roald Dahl
2. My best friend is Reynard the Fox, trans. by James Simpson
3. Lately, at work [I've had to deal with] The Fleet Street Murders, by Charles Finch
4. If I won the lottery, I'd be The Left Hand of Darkness, by Ursula K. LeGuin
5. My fashion sense [says to join] The September Society, by Charles Finch
6. My next ride [will be to] Green Dolphin Street, by Elizabeth Goudge

7. The one I love is [here] Time and Again, by Clifford D. Simak]
8. If I ruled the world, everyone would [come] Up From Slavery, by Booker T. Washington
9. When I look out my window, I see Starship Troopers, by Robert Heinlein
10. The best things in life are The Notebooks of Malte Laurids Brigge, by Rainer Maria Rilke