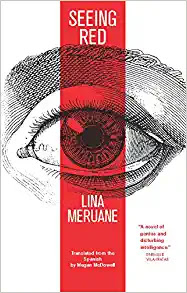 I was quite interested in this Chilean novel, which I saw billed as "one of Chile's most exciting young writers" in her first work translated into English, which was about trauma and its effects.  I didn't quite expect what I got!

Lina is a young Chilean grad student living in the US with her boyfriend, Ignacio, but she has to be extremely careful with her eyes, which have a bunch of extra veins growing in them, and they're brittle.  So the first thing that happens is that the veins burst and Lina becomes very nearly blind as one eye fills with blood and the other comes pretty close.*

Immediately, her life becomes far more difficult, as she has to take a leave of absence and usually depends on Ignacio to get around.  The doctor wants to wait and see if the blood kind of goes away.  Her family back in Chile want her home immediately and for her to see a proper Chilean doctor; she and Ignacio do travel down, but Lina's fraught relationship with her dramatic and overbearing mother impedes any other action.

Back home, Lina needs an eye operation right away.  (I tell you what, I have never ever read so much detailed description of eye surgery in a novel, and I'm not sure I ever want to again.)  Recovery is long, and gives her plenty of time to fret about the possible results.  She becomes obsessed with eyes; her own, Ignacio's, her mother's.  Eventually, her demands on her loved ones reach an intolerable impasse.

Based on the blurb, I'd expected a lot more about trauma and relationships and a lot less graphic description of eyeball anatomy and surgery.  As someone with particularly difficult eyeballs, I'm not sure I would recommend it to anybody else like me.  (On the other hand, maybe somebody without difficult eyeballs would find it unendurably horrifying?)   The whole thing is supposed to be based on Meruane's own experiences, blurring the lines between fiction and reality.  Which, of course, makes me really wonder exactly how far Meruane's experience went, because she seems to be sighted now.   It was a very good novel; just not what I expected.

I am not sure if a woman a few years older than I am qualifies as one of Chile's exciting young writers.  Unless all the writers in Chile are 70+ and none have emerged in the last 30 years?  Regardless, she is an excellent writer and the accolades are all deserved.  This was a gripping and skilled novel.

*This description freaked me out so much that I asked my ophthalmologist friend if it was real.  He says "Vitreous hemorrhage, or bleeding inside the eye due to neovascularization (abnormal blood vessels or veins inside the eye) can occur with many causes...."  So, there's something new to worry about...agh.