The Mysteries of Udolpho Readalong: III 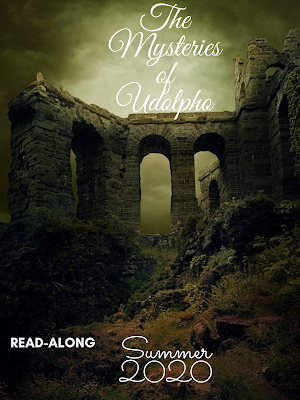 Here we are at the end of Volume III, and things have been quite exciting.  HAS Montoni murdered his own wife?  Who is playing that mystery music?  Will Emily ever escape?
One of the guards says he's guarding Madame Montoni and will take Emily to see her, though not until the middle of the night, and all on her own.  After leading her through a lot of deserted and ruined rooms, he points her into a tower, where she finds a torture chair and a body.  She passes out and revives only to realize she's being abducted to who-knows-where!  Luckily, her maid Annette had followed and raised the alarm.  It seems the spurned Morano had a scheme.
Emily is now sure that Montoni has murdered her aunt.  (Also, there is a mysterious figure on the ramparts at night!)  But Montoni says she's in the east turret, so Emily goes to check it out, even though she's sure she saw her aunt lying dead.  But!  Madame Montoni is not dead -- yet, anyway.  She's been very ill, and is about to die, but Emily manages to finagle her removal back to her own room, so she can die in some peace.  Her aunt's final wishes are that Emily refuse to sign the family estates over to Montoni.
Emily is much more stubborn about honoring final wishes than she would be on her own account, so she stands up to Montoni's demands.  She also hears that the castle has some soldiers being held prisoner -- that must be where the music is coming from!  maybe it's Valancourt! -- so she wants to find out about that.  But the castle is being attacked, so Emily is whisked off to a cottage in the valley, where she is still a prisoner, but at least gets to go outside and be friends with a peasant girl.
Once back at the castle, there isn't much to do except wonder whether Valancourt is in the castle too.  A servant finds out for her that there is a man from her home county, who knows and loves her!  It must be Valancourt!!  The guard is bribed, the prisoner sneaks out...and it's not Valancourt at all.  It's a former neighbor of Emily's, Du Pont, a very nice man who has anonymously languished after her for years.  Anyway, all the good guys manage to escape out of the gates, and they go as fast as they can, in hopes of not getting caught.
Meanwhile, back at the ranch the village where Emily's father died, a new neighbor has moved in to the chateau, and young Blanche has just been released from her boring convent education.  She can't wait to see the world!  This country estate is so full of lovely scenery, she is very happy.  Her stepmother complains a lot.  Emily and company arrive at the same place, and Emily plans to stay at the convent, but first she stays with Blanche -- and Valancourt arrives.  Joy!  But...he's changed.  In fact, he's been getting in to some pretty bad company, and although he still loves Emily, he has not exactly been pining away and searching for her high and low.  He may no longer be worthy of her esteem....
So fun times -- still lots of leaning on furniture while nearly fainting.  The words sublime, repose, and pensive melancholy all recur with great frequency.  Annette, the maid, is a nice girl but also a silly chatterbox, as befits her lowly station, so that's annoying.
I do really like how realistic Emily is about Valancourt.  She knows that she can't be happy with him if he has developed a massive gambling problem and some other serious problems.  I really like that she doesn't plan to Save Him With Her Love.

On to Volume IV!  I'm really looking forward to  seeing how this all turns out.  I know that the horrid black veil's secret is revealed, so they must wind up back at Udolpho...
20 books of summer English literature Gothic lit TBR challenge