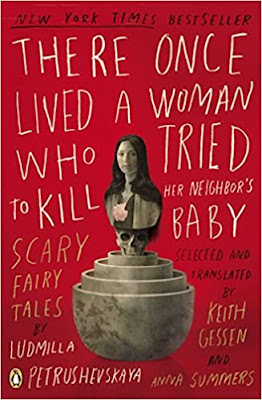 There Once Lived a Woman Who Tried to Kill Her Neighbor's Baby: Scary Fairy Tales, by Ludmilla Petrushevskaya

This is the second collection of Petrushevskaya's stories I have read, and she is a great writer, although her material is mostly raw misery, Russian style.  In the other post, I quoted a review blurb as saying, "nothing about it screams 'political' or 'dissident' or anything else.  It just screams."   That said, the 'fairy tale' genre works well.

It actually took me all summer to read this collection; since I often get tired of too many short stories at once, I eked it out over months.  Even so, I can recall first story in the book -- the one about the woman who tried to kill her neighbor's baby -- as though I read it yesterday.  Another story deals with a plague in the city and the family that tries to survive it.  Or there's a teenage girl who dies, and her father makes a deal to save her.

Twin ballerinas run afoul of a wizard who turns them into one person, except for two hours a night.  This story had a line I liked:

"And that's that," the wizard said sadly, and disappeared.  Why sadly?  Because life always appeared to him in its worst aspects, even though he could do anything.  Really, he had no life to speak of.

Fans of Russian literature will like this collection of very scary fairy tales.  Angela Carter's got nothing on Ludmilla Petrushevskaya.

Here endeth my contributions to Women in Translation month!  I read three books, from Chile, Greece, and Russia.