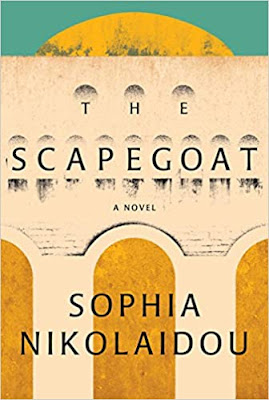 The Scapegoat, by Sophia Nikolaidou
In 1948, an over-eager American journalist reporting on the Greek civil war was pulled out of the bay, murdered.  The American government threatened to withdraw aid unless the killer was found immediately, and so the Greek police decided who did it.  Manolis Gris, a junior reporter, spent 12 years in jail.
In 2010, Minas Georgiou is the smartest, and most disaffected, kid at his high school.  Everybody is preparing for the exams, but he doesn't want to go to university or ever take another exam again.  (After all, the Greek economy is in freefall, and there doesn't seem to be much point in anything.)  The maverick teacher at the school gives Minas an assignment: instead of exam prep, investigate the Gris case, and give a presentation on it.
The story of the Gris case is presented in a mosaic made of testimonies from the people involved -- almost everyone, except Gris himself.  Blended with the old stories, we see Minas figuring out what he wants from life, and we learn about the connections between the adults in Minas' life, which he is completely unaware of.
If this were a regular mystery novel, Minas would unearth new evidence and figure out the case.  He would present his information to his audience, prove that Gris was innocent, and point the finger at the real killer.  The maverick teacher would have his methods vindicated and Minas would be grateful.    But absolutely none of this happens.
Instead, through the story, Nikolaidou weaves a meditation on sacrifice -- truth and justice -- honesty and corruption  Gris was a scapegoat, chosen to save his country by taking the blame for a murder that was probably unsolvable -- or maybe not.  It was all for the greater good, right?   And here in 2010, with the government as corrupt as ever and the country's future uncertain, what scapegoats are needed, and who will pay?  For the greater good, of course.
Thessaloniki, also known as Salonica, is an important presence in the story.  I now feel like I could walk to the Agia Sophia myself.
The murder is actually based on a real case.  George Polk, an American journalist, (to quote the translator) "was killed in circumstances that remain unexplained to this day.  Polk was investigating atrocities on both sides, as well as calling the American to account for their support of the Greek government."  Today, the George Polk Award is given yearly for intrepid reporting.
A really neat novel.  I don't know anything about modern Greek literature, but this was great.  And, remember, August is Women in Translation month, so grab a book and do some WIT reading too!
_____________________________
This is Summerbook #11, so I'm kind of behind, but to be fair, Udolpho and Golden Bough are both on the list too, and I've finished a couple that haven't been posted yet.  We'll see how I do...I hate failing challenges!
20 books of summer mystery read around the world Southern European literature WIT August