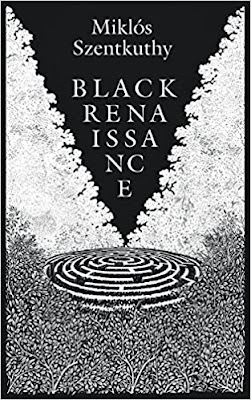 Miklós Szentkuthy, Hungarian and cosmopolitan (that is, he was in favor of pan-Europeanism rather than nationalism), wrote a sort-of-fictional synthesis of European history and culture, seen through his own very strange lens, and narrated by "St. Orpheus."  The ten volumes of St. Orpheus' Breviary span decades of work and centuries of history, and swirl around the 'marriage of Athens and Jerusalem' -- the contradictions, fractures, and cruelties that make up European history -- but nothing about this is straightforward or anything most people would recognize as history, or logic, or even narrative.  Black Renaissance was written in 1939 (but the title doesn't seem to have anything to do with contemporaneous events).  Also, I love the cover so much, I can't even tell you.  This is a fantastic cover.

Now, obviously a work like that is going to be way over my head.  I won't claim to have understood this book.  Sometimes I had a fairly clear idea of what was going on, but much of the time...no.  It was an experience, though!

Szentkuthy uses approximate 500-year increments as his framework.  The Emperor Tiberius and Jesus Christ represent the start, so to speak.  Theodora, empress of Byzantium, is around 500 years later.  St. Dunstan, Pope Sylvester II, and St. Stephen are 1000 AD, Brunelleschi, Elizabeth I, and Monteverdi represent later times, and then there is Szentkuthy, and us, in the present.  Not that these come in any kind of order, of course; it's a grand mix-up, as Monteverdi meditates upon Tacitus and Elizabeth's tutor writes her a letter.

Szentkuthy thought of this as a novel, I think, but it bears little resemblance to the usual form.  There isn't exactly a plot.  The characters are historical, but much about them is fictional -- their letters, poetry, and incidents from their lives.  Monteverdi, as a child, wanders into a real church that wasn't actually built until some time later.

One bit I had fun with was a letter by Brunelleschi in which (among other things) he plans out a set of carved chairs for the Pope, upon which will be depicted historical scenes -- but the scenes are ridiculously mismatched and crammed full of unlikely detail.  On one armrest will be "a portrait of the Holy Roman Emperor Frederick III...partly a Tristan figure, the Germanic ghost of sensual idealism, partly a low-caliber despot, a by-now totally bourgeois-style unlawful layer & black-marketeer."  The other armrest will feature a "hyper-Parthenon" with a crowd of bizarre figures in front.  And that's just the arms of the first chair -- it gets more weird (in the old sense) as it goes.

Or the unnamed tutor writes to a teenage Elizabeth: "...you can learn from Pergamos' idol hysteria that religion always has a big chance when it is foreign and exotic, not one's own....Then the desperate, greedy aggregation of gods begins -- as poachers, people sneak into nocturnal gardens and steal foreign gods off the altar, even forbidden game -- they organize veritable metaphysical dives & mints of religious counterfeit money, because what others have, the foreign, is unfailingly truer.  That gesture, needless to say, is a thousand times more congenial than the Pasiphǣ type of bull-abstraction.  That is: the trading-in of the world's huge capital of unknownness for the small change of irrationality of children's rooms: in place of the silence of a god-phobic ignoramus are the bells of a donkey-ignoramus, & therefore, there is at least some vulgar polyphony and carnival gaudiness in it."

So, you see what I mean.

Of the ten volumes of St. Orpheus' Breviary, two have been translated into English, ten years apart.  I'm quite interested to see if any of us live long enough for another few volumes!

20 books of summer Eastern European literature read around the world