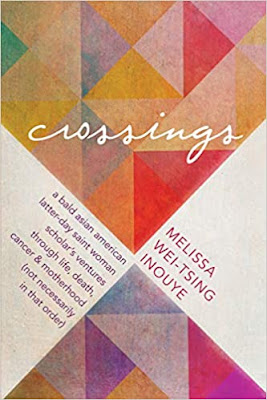 This book is really a project put together for the author's four children, who are/were too young to read it yet.  But she was dealing with cancer, and wasn't sure she'd survive -- so she put together a collection of essays, letters, talks, and meditations for them to have one day.  (And if it was a published book, it couldn't get lost very easily!)  Lucky for us, the rest of us get to read it too.  I enjoyed this collection a lot, and it gave me some good things to think about.   (Note: I assumed the 'bald' part was due to the cancer, but nope; she had already lost her hair to alopecia in her 20s.)

For one thing, she is just very fun to read, and has had an exciting life.  She and her husband/family have lived in Cambridge, Hong Kong, Taiwan, and now Auckland.  She's a brilliant and busy scholar with a long strong of amazing accomplishments.

And she's also a really wise, thoughtful, insightful person.  So she has a lot of wonderful things to say.  Many of these things are about her faith, and about how that mixes with her scholarship and other facets of her --and her family's -- life, including cancer.

The general focus ends up being [lifted from the blurb] "how Latter-day Saints in an increasingly globalized Church might cultivate unity without leaving their distinctive gifts behind."  But also, there are the family newsletters, and end-of-semester talks to her students, and essays about the joys of running (did I mention she's also a long-distance runner?).

So I loved this book, and have already recommended it strongly to two close friends.  Here are some bits I liked:

...the most important thing I learned is that love is the power that allows you to be useful to others.

China, the land of my mother's ancestors, was not familiar to me when I first encountered it as a university student.  But now it feels like home -- now, one of many homes.

As participants in a globally integrated world, what role should we play?  On the one hand, how can we accept evil?  Who will answer for the sufferings of prisoners of conscience?  How can we allow tyrants and bullies to prosper while the innocent come to harm?  On the other hand, how can we decisively silence those who perpetuate harm without doing harm ourselves?  Can we fail to acknowledge the way in which we or our own histories have played a role in creating the problem?  How should we decide at whom to cast our stones?  If we do not agree with the views of a person, or a party, or a nation, is the best course of action to treat our opponent as an enemy, someone whose welfare we work to erode?  I don't think so.

From a Confucian point of view, civilization is not what people do or what they build.  Civilization is what people are.  It is the daily work of humans at being humans. It is something we both find within ourselves and borrow from each other.  It is something we glean from ordinary encounters with frustration, disappointment, and love...Civilization is humans being civil -- being ren, or benevolent, and acting in accordance with li, the rituals that have emerged over centuries to acknowledge our shared humanity.

Far more than those who have sailed through life without a hitch, people who have kept going amid setbacks, delays, and crushing defeats are people who are worthy of respect.  They are the people who have gained the ability to see clearly, to heal others, to warn with authority.  I realize that a truly valuable life involves being battered, scarred, and frightened in generous proportion to feeling happiness and enjoyment.

Keep in mind that most of the world's 3.3 billion women do not speak your dialect of feminism.  For instance, they might not define power in terms of the ability to hold a position in a bureaucratic hierarchy.  Of course, use the languages in which you're fluent to do the work you're capable of doing.  But don't forget that others' languages and discourses are valid.  For instance, to discount women's 'unenlightened' voices and viewpoints simply because you don't understand them is the opposite of feminist.  At church, through frequent interaction with many beloved Others, we learn to be polyglots.  We learn that people can be wise and good in different ways.  Someone with little formal education can offer an eloquent and moving prayer.  Someone with 'ignorant' and 'wrongheaded' political views can teach us how to meet life's challenges with grace and compassion.