Summerbook #13: Beside the Ocean of Time 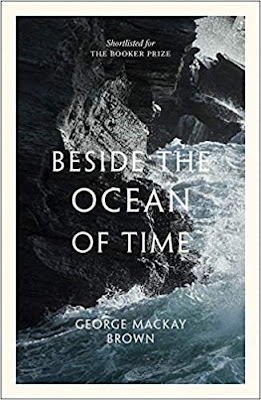 Beside the Ocean of Time, by George Mackay Brown

I like to listen to the Slightly Foxed podcast, which has added quite a few things to my reading wishlist.

A while back, they did an episode on George Mackay Brown (pronounced MaKEE), who is mainly considered a poet -- one of the greats of 20th century Scottish literature -- but who wrote stories, essays, and plays as well.  He was from the Orkney islands, and those islands were very important to his writing.  This 1995 novel is Brown's last, and was shortlisted for the Booker Prize.

Thorfinn Ragnarsson lives on the tiny island of Norday* -- it's the 1930s, and Thorfinn is known as the laziest, most useless boy on the island, because he prefers to spend his time daydreaming, imagining himself in other times.  In imagination, Thorfinn sails with his Viking ancestors and rides to the Battle of Bannockburn.  Stories of other islanders are interspersed with Thorfinn's voyages, and we even see the island in 'the future,' as oil development takes over and Thorfinn comes back to a nearly-deserted island, looking for solitude after his experiences in a German POW camp and for space to write his book.

This is truly a remarkable novel with lovely writing that will stay with the reader.  Or, at least, it stayed with me.  The island and its people are beautifully written, but the prose is not overburdened with conscious style or description.  It's light.  It doesn't feel like Poetic Writing; it's just beautifully done.  Highly recommended.

*Norday is tiny, and also fictional!