By Jean - August 01, 2020
The White Mountains
The City of Gold and Lead
The Pool of Fire
When the Tripods Came, by John Christopher
I've always really liked John Christopher's novels for -- I guess I'd say ages 10+.  They're fine as YA, and they're not too difficult for most middle-grade readers.  Christopher specialized in apocalyptic and post-apocalyptic stories, which generally feature a very ordinary English boy of 12 - 14 as the protagonist.  The Tripod novels were his breakout stories, and are still the most famous today.  Sometime in the mid-80s, Boys' Life did a graphic serial of the stories, and that's where I first read them, in my brothers' magazine.  (Boys' Life is the Boy Scout magazine, if you're not familiar with it.)
The world has been enslaved to the Tripods for at least a hundred years; nobody knows just how long.  Everyone is Capped at the age of 14, and after that they are docile and obedient, worshiping the Tripods.  Will lives in a tiny English village at a pre-industrial level, and he's never given a lot of thought to his future.  He'll be Capped next year and follow his father in being a miller.  Then he meets a Vagrant (a person whose Capping didn't take properly) and finds out that there is a community of free people far away in the mountains.  He and his cousin decide to make an attempt at getting to these legendary mountains.
In later volumes, Will and others manage to infiltrate the Masters' city in order to understand what is even going on.  Nobody has ever seen a Master, except those who serve them, and they are never seen again.  The few free people of Earth are going to try to defeat these strange creatures and liberate their world, but it's a long and difficult road.
The prequel, When the Tripods Came, should only be read after the others.  (Apparently, when Christopher wrote the first volume, he wasn't even sure who, if anyone, was in the Tripods.)  It's the story of how the Masters managed to take over the entire planet.
Things I like about these stories are, first, that Will is an incredibly average kid.  He's nice enough, and not stupid, but he's thoughtless, impatient, and prone to sulking.  I like that he is just a regular, realistic 13-year-old boy.
The Masters are really interesting, and so is their City.  They are very alien, and the two species can't really even understand each other.  Will calls it the City of Gold and Lead because it has a golden wall, and the gravity is artificially increased so that a human feels made of lead.  (Yep, this is a X of Y and Z title, but it way predates the vogue for them, and I've always liked it a lot.)
When I last read these books years and years ago, I wasn't any too clear on the geography, but it's actually very much in a place.  Any English kid would have recognized the places from the descriptions, but an American kid like me, not so much.  Will and company trek across the Channel and through a ruined 'great-city' which turns out to be Paris, on their way to Switzerland.  Later on, they take a barge up the Rhine.  And eventually, they find out where the other Cities of the Masters are.
Any SF fan sort of person should really read at least some John Christopher, and these would be the best place to start.
Now, I got into the mood to read these books again because of a quilt I made!  My guild has a challenge this year, and (to be short) I wound up making a Tripod quilt based on a design by my oldest kid, who has always loved the stories.  I'm quite happy with the result.  It's supposed to be a secret quilt until the unveiling at the end of the year, but I don't think anybody in my guild reads my blog.  (If so, don't look!)  So here's a sneak preview: 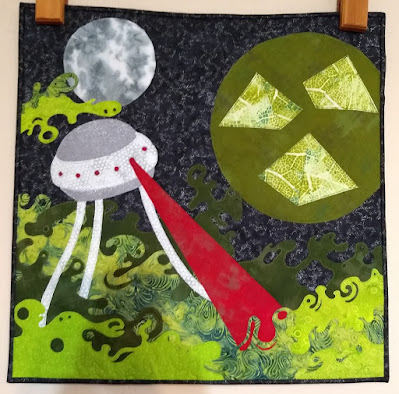