Tales From A Rolltop Desk 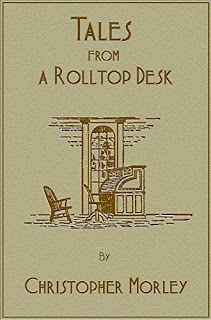 Tales From A Rolltop Desk, by Christopher Morley
Hey, two Christophers in a row!  Ha.  This Christopher, however, was an American journalist type who wrote a lot of funny stories, most famously Parnassus on Wheels and The Haunted Bookshop.
This little tome is a collection of short stories published in magazines in the late 1910s, back when short stories in magazines were the great American pastime.  Just about all of them are set in the journalistic scene of New York City, and they're nearly all funny -- but there's a mystery and a ghost story too!  They feature bright, clever secretaries and young reporters scrambling for their wages -- all the usual suspects for New York stories, and often reminded me of P. G. Wodehouse's New York stories, except these came first.  I wonder if the two knew each other...
...having done a few minutes of poking around, I can't see how the two could have avoided meeting, though there's nothing to indicate a friendship.  But they were both in the New York theater and literary scene at overlapping times.
Anyway, these were fun stories and I think I'll nab any more Morley that comes along.  (This, of course, came off the donation table months ago -- there hasn't been a donation table since lockdown started -- and it's actually the original 1921 edition, discarded from a library in the next county.*  There is a note on the copyright page that says "All rights reserved, including that of translation into foreign languages, including the Scandinavian," which really makes me wonder what there was about the complexities of copyright law in 1921 that made that necessary.   It's pretty beat-up, but the etching on the cover is the same design as the cover shown here, which is for the Kindle version -- and they want a buck for it, which is nice and cheap but all this stuff is in the public domain and almost certainly on Gutenberg or something.)
* The card pocket is still in place on the inside cover, and says that "A fine of two cents a day will be charged on each book" that is not returned on time.
American literature comedy short stories TBR challenge