Parnassus on Wheels and The Haunted Bookshop

By Jean - March 13, 2019
Parnassus on Wheels and The Haunted Bookshop, by Christopher Morley

These fun books came across the donation table and I just read them in spare moments.  Several years ago, I downloaded The Haunted Bookshop, but I couldn't understand the first chapter at all, so I quit.  I had no idea that it was a sequel to Parnassus on Wheels!  Now it all makes sense.... 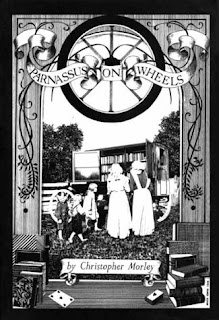 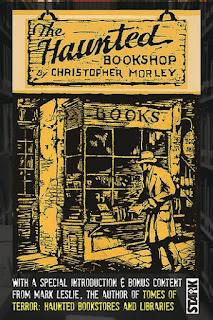 Parnassus on Wheels is the narrative of Helen McGill, spinster, who lives with her brother on a farm.  Until a few years ago, they farmed happily together, but then Andrew wrote a book and became a successful writer about the joys of country life, and things have never been the same since.  Helen is pretty fed up and the last straw arrives on a wagon in the form of a mobile bookstore, Parnassus on Wheels; the owner wants to sell the outfit to Andrew so he can retire and write his book, about the joys of bookselling.  Helen decides that it's high time she got to go out gallivanting around the countryside and let Andrew run his own farm, so she buys Parnassus and sets out to become a traveling bookseller.  She'll just take this Roger Mifflin fellow along for a day or so while she learns the ropes, and then drop him off at the train station...

The adventures of Helen and Roger are a lot of fun.  There are bandits and storms, irate landladies,  sheriffs and even a train wreck!  I think I actually enjoyed this one better than the next, which is still quite a good read.

In The Haunted Bookshop, the Great War is over and the Mifflins have settled down in Brooklyn to run Parnassus at Home.  An energetic young advertising clerk happens by and is intrigued by the garrulous Roger, and at about the same time a friend asks them to take on his daughter as a favor, so she (fresh from finishing school) can find out what real working life is like.  But odd things are happening at the bookshop.  Why do people keep coming in and asking for Carlyle's Cromwell, and why is that tome never where it ought to be?  Young Mr. Gilbert thinks he smells a rat and he's determined to find out what's going on.

This story is still great fun, plus there are schemes and spies and adventures.  I particularly got a laugh out of this bit at the start of the book, where Mr. Mifflin and Mr. Gilbert first meet and entertain themselves by having their dinner conversation in a deliberately Johnsonian style:

"Ah, you should taste Mrs. Mifflin's cooking!" said the bookseller. "I am only an amateur, who dabbles in the craft during her absence. She is on a visit to her cousin in Boston. She becomes, quite justifiably, weary of the tobacco of this establishment, and once or twice a year it does her good to breathe the pure serene of Beacon Hill. During her absence it is my privilege to inquire into the ritual of housekeeping. I find it very sedative after the incessant excitement and speculation of the shop."

"I should have thought," said Gilbert, "that life in a bookshop would be delightfully tranquil."

"Far from it. Living in a bookshop is like living in a warehouse of explosives. Those shelves are ranked with the most furious combustibles in the world—the brains of men. I can spend a rainy afternoon reading, and my mind works itself up to such a passion and anxiety over mortal problems as almost unmans me. It is terribly nerve-racking. Surround a man with Carlyle, Emerson, Thoreau, Chesterton, Shaw, Nietzsche, and George Ade—would you wonder at his getting excited? What would happen to a cat if she had to live in a room tapestried with catnip? She would go crazy!"

"Truly, I had never thought of that phase of bookselling," said the young man. "How is it, though, that libraries are shrines of such austere calm? If books are as provocative as you suggest, one would expect every librarian to utter the shrill screams of a hierophant, to clash ecstatic castanets in his silent alcoves!"

"Ah, my boy, you forget the card index! Librarians invented that soothing device for the febrifuge of their souls, just as I fall back upon the rites of the kitchen. Librarians would all go mad, those capable of concentrated thought, if they did not have the cool and healing card index as medicament!"

These two are minor classics of American humor and a must-read for any book lover.  I'm glad I found them.