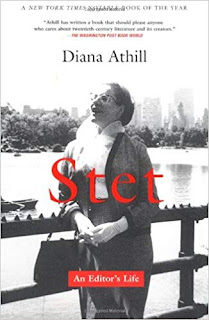 Stet: a Memoir, by Diana Athill

I've been listening to the Slightly Foxed podcast, which is a bit of a problem when it comes to my TBR pile and its daunting rate of growth.  One episode mentioned this memoir by Diana Athill, who was an editor in London for decades, and it sounded so fun that I had to have it.  InterLibrary Loan was my friend, and I enjoyed it very much.  It also put three more books on the TBR list, which I hope doesn't happen every time; the podcast gave me two or three titles, and if each one gives me two or three titles more, pretty soon we'll have a 'going to St. Ives' problem.

Athill starts out with her youth as one of those county families with no actual money but some land and a taste for the leisured life.  She lived with horses and dogs outside, and books inside, and then went off to London to earn her living, which coincided with the war, and eventually turned into editing.  She ended up at Andre Deutsch, and edited books for a good 40 years or so.

The first half of the book is a chronological memoir of life in publishing.  It's a great pleasure to read (although intermittent accounts of love affairs show up at boring intervals) and there is plenty of humor.  I particularly liked the description of editing one book, written by an expert and full of wonderful detail but very badly written.   After she painstakingly edited just about every sentence in the book, the author sent her a review that praised the writing and pointed out that there had been no need for all that editing fuss.

The second half consists of Athill's reflections on working closely with six of 'her' authors -- including Jean Rhys and V. S. Naipaul.  Also very interesting and, like the rest of the book, honest in her assessments of others (and herself).

The whole thing is a delightful read and, I'd say, something just about any book-lover would really enjoy a lot.  I don't mean necessarily everyone who likes to read -- I mean anyone who is interested in books, in how they are written and produced and made.  It's out of print, but libraries have it (though not many in the US) and used copies are available.

One of Athill's last thoughts is a short meditation on what she considers to be the shortcomings of publishing during her career.  She points out that English publishing was run almost entirely by people of her own 'caste' -- upper-class types with a particular outlook -- and that the resulting books tended to appeal to that caste and not to others.  She singles out Virginia Woolf and Angela Thirkell as rather embarrassing examples -- I meant to put the quotation here but then I lent the book to my mom before it has to go back.  Now, I'll agree that both of them were awful snobs, but I'm going to defend Thirkell (Woolf hardly needs me).  She is indeed an example, and I can see where from within that world, she's cringe-inducing; nearly all her 'real' people are of her own class.  But for me as a complete outsider, reading her as someone from a very foreign world, it's possible to read her for her many good points and take the others with a grain of salt.  It's much easier to enjoy her for what she is, and I'd hate to miss out on her books.

So -- if you like books about books, get hold of this one sometime.