Lord Dunsany, no wait, a movie or so instead

By Jean - March 22, 2019
I've been meaning to read Lord Dunsany's Book of Wonder for some time.  Well, I read it once long long ago, and don't remember anything about it except that I didn't get it, so I wanted to try again.  It was on my TBR shelf, and I figured I'd read it for the Ireland event.  It turns out I just don't like Lord Dunsany.  I read several stories, and the idea of reading a whole lot more of them is not a happy thought, so I'm quitting.  The stories are all very short, and consciously strange, with lots of names:


King he was of Afarmah, Lool and Haf, over-lord of Zeroora and hilly Chang, and duke of the dukedoms of Molong and Mlash, none of them unfamiliar with romance or unknown or overlooked in the making of myth. He pondered as he went in his thin disguise.

So, I guess I still don't get it.  But I don't think I'll bother with Lord Dunsany again, be he never so important a pillar of early fantasy literature (something I usually try hard to read).

But now I don't have an Irish book to tell you about!  Instead, I will tell you about my very favorite movie, which happens to be an Irish fairy tale.  It's The Secret of Roan Inish, and it's based on a lovely children's book, The Secret of the Ron Mor Skerry, which just so happens to be back in print thanks to the NYRB children's classics imprint.  It has charming illustrations, and one day I'm going to embroider one of them in white on navy, possibly for a tote bag.  (Since I don't have enough tote bags, ha.) 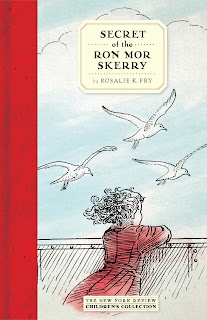 Fiona's family had always lived on an island off the west coast until the war forced everyone to the mainland.  During the evacuation, baby Jamie was washed out to sea in his boat-shaped cradle.  There are stories that Jamie is still alive, living with the seals out around the islands, and Fiona thinks that if they move back to their old home, maybe Jamie will come back...

The music in the film is just lovely, and we've listened to the soundtrack for years.  When my kids were taking violin from our beloved teacher (who moved away, and we still miss him, though our current teacher is great too), I told him about The Secret of Roan Inish, and recommended it for his family.  Next thing I knew he was assigning my kids the music.


There are two other Irish fairy-tale movies that we've really enjoyed as a family, and that are, uh, no longer available on Netflix.  They both have similar animation and music styles -- they're from the same studio.

The Secret of Kells is a romanticized story about the creation of the Book of Kells; little Brendan lives at a monastery that is building a huge wall to keep the Vikings out, and he explores the forest and meets Aisling, presumably of the Sidhe.  Brother Aidan, a refugee from Iona, arrives with the unfinished Book and Brendan wants nothing more than to help.

The Song of the Sea features Ben, whose little sister Saoirse does not speak.  Ben blames her for their mother's death, but Saoirse -- and their mother -- is a selkie, and must be rescued from Macha if she is to live.  There is a lot of great music in this one too.