By Jean - March 23, 2019
It may not seem like I've done much March Magics reading, but I have in fact -- in the spirit of reading the favorites -- read two and a bit DWJ novels. 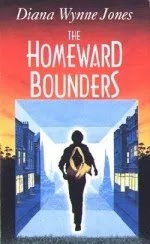 I needed to read Homeward Bounders all of a sudden because one of the kids had a phone catastrophe and my husband pretty much said "As to that..." and produced a replacement phone out of thin air.  It was a pretty impressive trenchcoat effect moment.  I adore Homeward Bounders, it's such a strange story and so compelling and tragic, yet of course has DWJ's humor and tendency to drop deep thought grenades on the reader (as in, you don't see them for a while and then *boom* -- in fact, I hereby declare that to be a new technical term.  Deep Thought Grenades.).

Homeward Bounders is what you get when you put multiverse theory, Greek mythology, and Dungeons & Dragons together in a blender, and add a street-smart Victorian urchin to the mix. 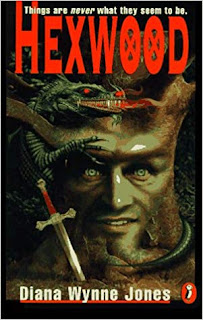 I also picked Hexwood from my DWJ shelf.  I love Hexwood for its bizarre complexity; I suppose she would have had to make extensive notes for the story structure, and I wonder if it would be possible to diagram it out somehow?  It's a daunting prospect.  I have to figure out some of it anew each time I read it, what with everybody having at least two identities, and those in deliberate contrast with each other.  Absolutely everything is juxtaposed with its opposite: a galactic empire with a medieval fantasy landscape, a super-intelligent computer with the ancient primeval forest, legendary heroes with futuristic tyrants....even Fire and Hemlock might not be quite this pretzel-like!


Speaking of which, Fire and Hemlock is what I'm reading now, though I'm not very far in yet.  And I need to start Howl's Moving Castle if I'm going to write a post for the right day!
DWJ Month