The Grey King, and a bonus 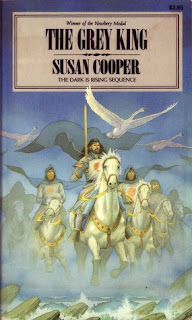 The Grey King, by Susan Cooper

Somebody read Susan Cooper's Grey King for the Welsh reading event, and I realized I hadn't read it The Dark is Rising for years.  I re-read it nearly every Christmas, but the others tend to get much less attention lately.  The Grey King did, after all, win the Newbery Award, so I figured this would be a good time to re-read it.  It's the fourth book in the Dark is Rising sequence -- and as I recall, the last one is really quite strange.

Will has been very ill indeed, and has actually forgotten his special knowledge, but he's sent to a family friend's farm in Wales to recuperate.  This places him exactly where he needs to be in order to fulfill the next step in his quest, which is to find a golden harp and awake the Six Sleepers.  He meets Bran, an unusual boy who could be an ally or an enemy, and Caradog Pritchard, a neighboring farmer and definitely an enemy.  Dogs are also everywhere in this story!  Will and Bran go through ordeals in order to win the harp, and waking the Sleepers is not easy.

"The Grey King" is a strong personage of the Dark, and lives on Cader Idris, the Welsh mountain.  I had to look up the geography, which Cooper has fooled with a bit.  Cader Idris (more commonly called Cadair Idris, evidently) is a huge rocky peak in the Snowdonia National Park.  Cooper populates it with nearby sheep farms and, I think, moves the lake Tal y Llyn a bit. 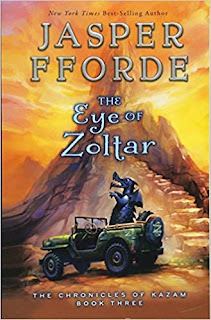 Cader Idris also features in the third book of the Chronicles of Kazam by Jasper Fforde -- The Eye of Zoltar.  I got it through Interlibrary Loan and had a great time reading it!  Jennifer and her co-worker Perkins head out to the wilds of the Cambrian Empire (approximately the western half of Wales) to search for the Eye -- they need it to save their dragon friends.  Gathering a guide and some terrible companions, they venture into the incredible dangers of Cambria, an adventure that comes with a guaranteed fifty-percent survival rate.

But get this -- the story ends on a cliffhanger!  Fforde had jolly well better write some more Kazam adventures soon!