One of my very favorite all-time bands is a New Zealand group called the Chills.  It's fronted by Martin Phillipps, whose lifelong project it is; the other members have changed quite a bit though the current lineup has been around for a while.  I first got into them with their 1990 album Submarine Bells, which was their first international release.  In 1992, they did a US tour, and I saw that they were playing in San Francisco -- at a venue I couldn't get to.  I didn't have a car or any friends with cars who wanted to go see a band they'd never heard of (cars were very rare in my world); it was too far from any BART stations and in a really sketchy area.  I sadly concluded I'd have to wait till the next time, but I never heard of another one.  Until now!  And now I have a car!

So my husband and I hopped into the car on Wednesday and started driving.  Wow, spring sure is pretty in California (if extremely short; see this poem)!  The drive was just lovely.  I was supposed to do the driving, but I lasted all of 45 minutes before I got too sleepy, so my poor husband had to drive down and then back again afterwards.  We hung around the Mission district for a bit -- luckily, we found a really great bookstore with a cafe attached -- and had some dinner before going in.

We got a very nice spot at a little table at the front of the balcony, which gave us a wonderful view.  There were two opening acts; one was okay, the other stank on toast.  But it was all entirely worth it, because the actual show was fantastic and the best thing ever.  They played most of the songs that I would have picked to hear, the playing was wonderful, and pretty much I GOT TO SEE MARTIN PHILLIPPS SING and I won't pretend I didn't tear up once or twice from joy. 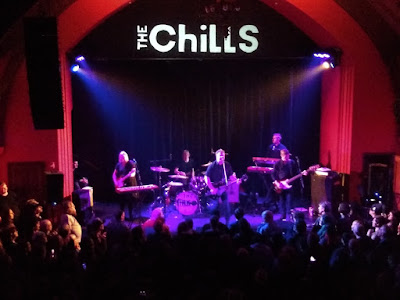 The drive back was brutal, and we got home at 3am, but we're still poking each other and going "We got to go see the Chills!"  I was 27 years late, but I got my chance!   And now I shall inflict photos and music videos upon you:

One of their most known early songs

Just one of my favorites

A more recent song that I just really like