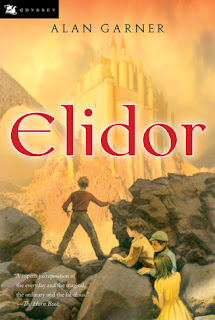 I chose this book for Dewithon, because I was under the impression that it had something to do with Wales...and it's set in Manchester.  So I was only a couple pages in and thought I was wrong, but Chris at Calmgrove pointed out some details, and the story features threads of both Irish and Welsh legend.

The four Watson siblings, bored and wandering around, go exploring and are suddenly shoved into a different world.  Elidor is not a lovely adventure world at all; it's a barren, post-apocalyptic wasteland, and Roland, the youngest, meets Malebron -- who promptly shoves him into a terrifying barrow to find some treasures and save his trapped siblings.  Malebron then tells them to take the treasures and hide them in their own world, and for over a year, nothing happens.  Until all of a sudden it does and the children are being hunted by men who mean to kill them to get those treasures.

Like most of Garner's work, Elidor is an unusual kind of fantasy story.  The children spend hardly any time in Elidor and much of the meaning is a bit buried.  There are clear echoes of Narnia: four siblings, and the youngest is the most faithful and the strongest, who has to learn to do what he needs to do regardless of what his older siblings are telling him.  (The oldest brother is desperate to find any way out of believing that there are four magic treasures and another world, not to mention a unicorn.)

So, what connections to Ireland and Wales?  I was glad for Chris' hint, because it's been far too long since I read my Irish mythology and I'd forgotten exactly what the treasures of Ireland are, but Garner really lays it out pretty clearly.  (And then I started reading something else and they popped up there too.)  Each treasure belongs to a city, which Garner shows as four castles, only one of which is still inhabited.  I need a chart:
These aren't given their proper names, or properties, and in fact once they're in our world they look like junk (luckily).

All right, so what about the Wales connection?  That's a good deal less obvious, and while I would have spotted the treasures anyway, I needed a big hint here.  Gerald of Wales told a story in his Journey Through Wales  about a priest who told a story about when he was a little boy: young Elidyr met two little men, who took him into their own land through a tunnel.  It was beautiful, though with no sun, and there was pleasure all the time.  They ate milk dishes with saffron, and hated lies, and gold was common there.  Elidyr visited often, and told his mother about the land, and she asked him to bring her a present of gold.  So he stole a golden ball and took it home, but the little men chased him and took it back, and he could never find the tunnel again. 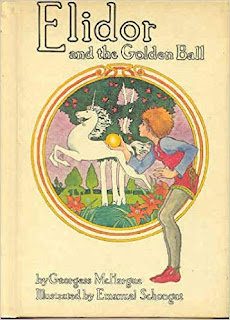 Elidyr would be pronounced the same as Elidor, as far as I can figure, so Garner used a Welsh name connected with the otherworld for his tale.  A picture book of the story was printed in 1973 in the UK, which must have been fun. I'd like to see that.