The Journey Through Wales and Description of Wales 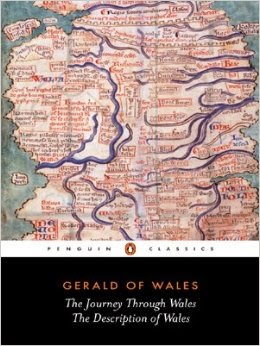 The Journey Through Wales and Description of Wales, by Gerald of Wales

This was a really fun medieval travelogue.  Like another of Gerald's works, The History and Topography of Ireland, it would be a good selection for someone interested in dipping their toes into medieval literature.

In 1188, Archbishop Baldwin (of England and Wales) made a tour of Wales to drum up support for an impending Crusade.  Gerald was part of his entourage, and he kept a record of the trip which he turned into The Journey Through Wales.  He details every stop, but relatively little of the text is actually about converting potential crusaders; he really talks a lot about local history and wonders.  Old battles and feuds, miracles, interesting anecdotes, and monuments fill the pages.  It is very fun.  For example:


St. David's cathedral was founded in honour of Saint Andrew the Apostle.  The place where it stands is called the Valley of Roses.  A better name for it would be the Valley of Marble, for it is in no sense rosy or remarkable for roses, whereas there are plenty of rocks all over the place.

In our own days a young man who lived in this neighborhood, and who was lying ill in bed, was persecuted by a plague of toads.  It seemed as if the entire local population of toads had made an agreement to go to visit him.  Vast numbers were killed by his friends...but they grew again like the heads of the Hydra.  Toads came flocking from all directions, more and more of them, until no one could count them.  In the end the young man's friends and the other people who were trying to help were quite worn out.  They chose a tall tree, cut off all its branches and removed all its leaves.  Then they hoisted him up to the top in a bag.  He was still not safe from his venomous assailants.  The toads crawled up the tree looking for him.  They killed him and ate him right up, leaving nothing but his skeleton. 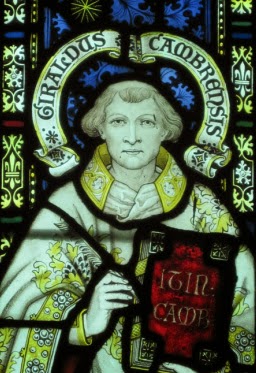 Like all Christian historians of the medieval period, Gerald sees history and his own time as the working out of God's plan on earth--a story that will culminate in the Second Coming of Christ and Judgement Day.  In his opinion, God has an agenda in Wales, and He is quick to punish irreverence and sin, as illustrated by all these anecdotes.  The Crusade is obviously a righteous cause (he quotes one eager young man as saying that the only thing there is to fear is coming home safely and not dying in the cause), and those who don't want to go, or who don't want their friends or relatives to go, are ripe for destruction.  When a wife tries to restrain her husband from going on crusade, you can be sure she is not going to live long.  Personally, my sympathies are all with the wife, who was doubtless wondering how she was to manage the family while her husband went off on a clearly insane mission
to get killed.

Then Gerald writes up his Description of Wales too.   He starts with a description of the landscape and rivers, but quickly moves on to the Welsh national character.  He is partly Welsh himself and is describing his own people, a project he eloquently defends in a preface (his colleagues wondered why he didn't tackle a more prestigious topic, like yet another re-telling of the Aeneid).  First he talks about the good points of the Welsh people, and then about their defects.  Sometimes he gets pretty shocking and then you realize what he's really saying....


Incest is extremely common among the Welsh...they have no hesitation or shame in marrying women related to them in the fourth or fifth degree, and sometimes even third cousins.

He's talking about the degrees of consanguinity prohibited by canon law, which the Welsh disregarded--just as we would today.  Then, in battle:


Their sole idea of tactics is either to pursue their opponents or else to run away from them.  They are lightly armed and they rely more on their agility than on brute strength.

If the Welsh would only adopt the French way of arming themselves, if they would fight in ordered ranks instead of leaping about all over the place, if their princes could come to an agreement and unite to defend their country--or better still, if they had only one prince and he a good one...

Gerald also brings up King Arthur a few times!  He gets some of his material from Geoffrey of Monmouth, for one thing, but he also says:


The Britons maintain that, when Gildas criticized his own people so bitterly, he wrote as he did because he was so infuriated by the fact that King Arthur had killed his own brother, who was a Scottish chieftain.  When he heard of his brother's death, or so the Britons say, he threw into the sea a number of outstanding books which he had written in their praise and about Arthur's achievements.  As a result you will find no book which gives an authentic account of that great prince.

The editor notes dryly, "Apart from the fact that Gildas was born on the south bank of the Clyde, there is no evidence to support any of this."

Gerald is thoroughly medieval in his love of explaining the world and God's plan, and in his careful scholarship and references to important texts mixed with (what we would consider gullibility) delight in the wonders of nature and God.  But he's also a bit of a rebel.  He's stubborn enough to insist on writing about Wales, an obscure corner of the world, instead of about the more standard topics of his day, and he feels that he has to defend himself on the point.  He talks at length about his reasons for writing and his certainty that no one will thank him for the work during his lifetime.   We have reason to be grateful for it, though, because his writing is lively and enjoyable, and gives us a wonderful picture of the daily life of ordinary people--which is not common for a work of medieval scholarship.

One last note--although this book is mostly about Wales, Gerald starts and finishes in Herefordshire, and describes it as part of his work; he considers it part of Wales.  So I'm going to count it as part of the Reading England challenge too.  And it was written in Latin originally, so it's translated!