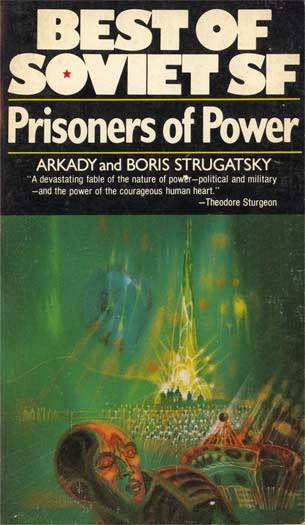 Prisoners of Power, by Arkady and Boris Strugatsky

I love these guys.  I'm going to need to find more Strugatsky brothers to read.

Far in the future, Maxim goes exploring.  On this future Earth, if you're a young, reasonably healthy guy with no particular idea of what you want to do yet and a sense of adventure that needs exercising, you open up the catalog, pick an unexplored planet, and head out to take a look at it under the auspices of the Independent Reconnaissance Unit.  Maxim fits that bill, and now he has landed on a planet that is...depressingly grey and flat.  And radioactive.

Maxim arrives in a society controlled by unseen military dictators who use radiation to manipulate the populace.  All the known nations have thrown themselves into a cataclysmic nuclear war that has left everyone and everything nearly destroyed--and they're still at it.  Maxim has the ability to withstand the mind-control radiation, and as he makes friends and finds his way through, he gets to understand how this world works.  He joins the army, then the rebellion, and then he just keeps moving.

This is almost entirely SF about a dystopian society, but it does also have some neat wider world-building elements as well.  The properties of the planet's atmosphere have had a large influence on scientific development, for example, which I liked.

I really enjoyed Prisoners of Power, and I read it kind of slowly so it would last a while.  It's just really good.  Every SF reader should try some Strugatsky!

Somebody made a movie a few years back, it looks like.  I would love to see it!
Russian literature SF/fantasy Translation Challenge

Arenel said…
I'm glad you liked it! I would not recommend the 2008 adaptation though. I remember being very disappointed with it. They've just made some high-budget action-packed blockbuster out of such an awesome book...
January 14, 2015 at 11:20 AM