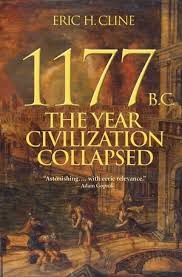 1177 BC: The Year Civilization Collapsed, by Eric Cline

Over 3000 years ago, the Bronze Age peoples around and near the Mediterranean had developed a network of wealthy and civilized nations that were connected by trade and royal kinship ties.  But somewhere around 1177 BC, it all went downhill.  Egypt declined, trade routes were ruptured, and a domino effect seems to have toppled one kingdom after another.  The Mycenaeans, the Hittites, the Babylonians and Minoans and others fell into a 'dark age' as technologies and writing systems were lost.  What happened?

We know that one thing that happened was invasions from the Sea Peoples--several groups of murky origin that came in, mauraded, and settled down to intermarry.  (The Philistines in the Bible were part of the Sea Peoples.)  But that's not really enough to explain the collapse.  Some scholars have proposed a massive earthquake for one civilization, or drought for others, but usually they've focused on one civilization at a time.

Cline proposes to examine the Late Bronze Age peoples as an interdependent network rather than as several independent states.   This was a strong and resilient system that could rally after a drought, or from an invasion--but perhaps it couldn't recover from several disasters, coming one after another, weakening the whole network until a systems collapse occurred.  Cline thinks that earthquakes, drought, famines, rebellions, and invasions all combined to break down the trade routes and culminate in the domino effect.

It's a very interesting book, and I think fairly convincing.  We have been able to learn a lot about international trade in the Bronze Age in the last few decades that shows that these kingdoms were far more closely connected than we realized.  Cline gives a nice picture, and as an added bonus, his book isn't an 800 page-long tome that seeks to exhaustively explain everything about each nation.  It's a reasonable size.  Pretty good.

This is part of the "Turning Points in Ancient History" series published by Princeton.  The book cover advertises that quite a bit, but what it doesn't tell you is that this is also the first book in the series and there aren't any more just yet.  I'm going to keep an eye out, though; I'd like to read the next one when it arrives.