The Mysteries of Udolpho Readalong: II

By Jean - July 27, 2020
The Mysteries of Udolpho Readalong
I've finished Volume II, so it's time for an update!  I'm keeping up with the schedule -- I'm really a bit late with this post -- and enjoying this leisurely read of a very long novel 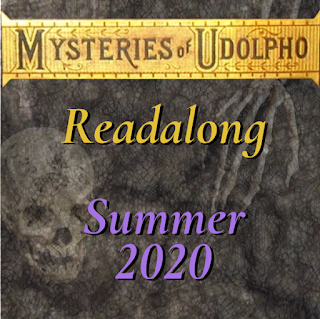 In Volume II, Emily is whisked off to Venice, where there are a lot of parties.   Her aunt, the new Madame Montoni, thinks everything is going to be great, but she is very wrong.  Montoni has a bit of a gambling problem, his friends are sketchy as all get out, and all of them will do anything for money.  Maybe it wasn't such a hot idea to marry this guy after all.

Among all the parties and boat excursions, Montoni's friend Count Morano is paying a lot of court to Emily, which she is not happy about one bit.  No matter how often she tells him she's not interested, he keeps pursuing her.  Montoni is pressuring her to marry him, and eventually comes up with a trick in which he 'understands' her to have accepted the suit.  He's determined that she is jolly well going to marry Morano whether she likes it or not.  Everything is prepared for the next morning, but...
...instead of a forced wedding, the ladies are now whisked off to Signor Montoni's mountain castle of Udolpho.   Morano has turned out not to have any money, so there's no point in forcing Emily to marry him.   Madame Montoni and Emily are, for all practical purposes, imprisoned, and they only see Montoni when he shows up to bully his wife into signing over her estates to him, since he has long since lost all his money at the gambling tables.  Being a fiery sort, she won't comply, and is confined to a tower alone.  Emily is pretty sure her aunt must be dead!  Meanwhile, there is a mysterious room near Emily's chamber, where there is a black veil covering one wall.  Emily has a peek and faints at the horrible thing she sees!  What could be behind the horrid black veil??   The spurned Morano tries to persuade Emily into an elopement, and there is a lot of fighting.  In fact, Montoni is clearly setting up to be the leader of a band of mercenaries, who will roam the country and plunder hapless travelers when they aren't engaging in battles.  The place is packed with vicious-looking soldiers and ruffians.  But every once in a while, late at night, Emily hears lovely music -- songs of her own homeland.  Who could be playing them?
The story is set in 1584, but honestly it's impossible to imagine Emily in anything but the Regency styles that were juuuuust coming into fashion when the novel was published in 1794.   She is so completely the perfect Regency miss.  (Now, Fanny Burney's heroines can only be imagined in the dress of 20 years before that!)  Also, she faints, or almost faints, on a regular basis.  Emily has a reasonable amount of gumption, but only after she talks herself out of fainting from fright, or sorrow.  She's always having to support herself on the nearest piece of furniture.
Emily also spends a tremendous amount of time looking out the window in a melancholy fashion, but to be fair, she doesn't have a lot else to do right now.  She's essentially trapped in her room; leaving it exposes her to the possibility of running into drunken soldiers wandering through the halls, and as it is her room isn't even properly secure.  And Montoni may well have murdered her aunt.  Emily has nowhere to go at all.
20 books of summer English literature Gothic lit Readalongs TBR challenge