By Jean - July 13, 2020
This is such a weird summer.  It's both boring and stressful.  There is almost nothing to do, which is kind of restful but also no fun.  I've decluttered a bunch of areas, though, so that is nice.  And this week my oldest is coming home for a visit and a birthday!
So what has Sir James Frazer been up to?  I read chapters 25-30 in the last couple of weeks. 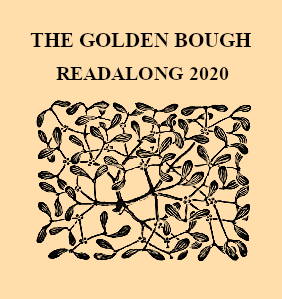 XXV.  Temporary Kings: So, instead of getting killed while still in the prime of life, in order to preserve the land at full strength, some kings figured out ways to get around it, such as installing a temporary king who has to go through a mock execution, or some other such dodge.  Here are various examples of temporary kings.
XXVI.  Sacrifice of the King's Son: Often those temporary kings do have to come from the royal family, in order to represent the king properly.  Who better than the actual son?  [I see some potential problems with this, actually...]  Frazer cites a legendary king of Sweden who sacrificed NINE of his sons to Odin -- not all at once, but one at a time in order to preserve his own life.  The tenth son survived because the people wouldn't let him be killed.  There are also some gruesome Greek legends about sons being sacrificed.
XXVII.  Succession to the Soul: Frazer theorizes that when the king is killed, his divine kingly soul is believed to be transferred to his successor -- another reason to kill off your king while in the prime of life.  This has to be speculation [dude, MUCH of this book is speculation] but here are some examples of somewhat related practices.
XXVIII.  The Killing of the Tree-Spirit.
XXIX.  The Myth of Adonis: Meditations on the transition from magic to religion, and how people have used both to try to get the most important things in life: food and children.  Let's talk about the Eastern Mediterranean countries, where many societies worshiped a young man god who died and rose, and was clearly a vegetation spirit: Osiris, Tammuz, Adonis, Attis.  In Frazer's telling, Adonis was beloved of Aphrodite, and wound up a sort of male version of Persephone.
XXX.  Adonis in Syria: Byblus in Syria and Paphos in Cyprus were major sites of Adonis-worship.  A bit about the ancient rites there.
Phew!  That chapter XXVIII was a doozy.  There's a lot of interesting stuff in here.  But Frazer seems determined to believe that ancient magic practices were taken so very seriously that people thought they actually controlled the seasons and weather themselves.  This strikes me as very, no, extremely unlikely.  It seems much more reasonable to suppose that people did their magic rituals in order to encourage things to go well, because it was so obvious that things could go disastrously wrong very easily.  One of my favorite historians, Elizabeth Wayland Barber, seems to me to have a much more plausible explanation in Dancing Goddesses, a book I loved and have been wanting to re-read.  Also, Frazer interprets everything he reads in the light of his own theory, which works kind of OK for Europe, and much less well for cultures he doesn't know much about.  It's absolutely disastrous when he talks about Australians.
I think I'm now at a half-way point , so I'm feeling pretty good about this routine of reading 3 chapters a week and making summary posts.
Some quotations:

But perhaps, for our purpose, the most instructive of these mimic executions is the following Bohemian one. In some places of the Pilsen district (Bohemia) on Whit-Monday the King is dressed in bark, ornamented with flowers and ribbons; he wears a crown of gilt paper and rides a horse, which is also decked with flowers. Attended by a judge, an executioner, and other characters, and followed by a train of soldiers, all mounted, he rides to the village square, where a hut or arbour of green boughs has been erected under the May-trees, which are firs, freshly cut, peeled to the top, and dressed with flowers and ribbons. After the dames and maidens of the village have been criticised and a frog beheaded, the cavalcade rides to a place previously determined upon, in a straight, broad street. Here they draw up in two lines and the King takes to flight. He is given a short start and rides off at full speed, pursued by the whole troop. If they fail to catch him he remains King for another year, and his companions must pay his score at the ale-house in the evening. But if they overtake and catch him he is scourged with hazel rods or beaten with the wooden swords and compelled to dismount. Then the executioner asks, “Shall I behead this King?” The answer is given, “Behead him”; the executioner brandishes his axe, and with the words, “One, two, three, let the King headless be!” he strikes off the King’s crown. Amid the loud cries of the bystanders the King sinks to the ground; then he is laid on a bier and carried to the nearest farmhouse.   [Wait, the girls are criticized and a frog beheaded??  This has no other context or explanation.]
I have already conjectured that the annual flight of the priestly king at Rome (regifugium) was at first a flight of the same kind; in other words, that he was originally one of those divine kings who are either put to death after a fixed period or allowed to prove by the strong hand or the fleet foot that their divinity is vigorous and unimpaired. One more point of resemblance may be noted between the Italian King of the Wood and his northern counterparts. In Saxony and Thüringen the representative of the tree-spirit, after being killed, is brought to life again by a doctor. This is exactly what legend affirmed to have happened to the first King of the Wood at Nemi, Hippolytus or Virbius, who after he had been killed by his horses was restored to life by the physician Aesculapius. Such a legend tallies well with the theory that the slaying of the King of the Wood was only a step to his revival or resurrection in his successor.

In Russia funeral ceremonies like those of “Burying the Carnival” and “Carrying out Death” are celebrated under the names, not of Death or the Carnival, but of certain mythic figures, Kostrubonko, Kostroma, Kupalo, Lada, and Yarilo. These Russian ceremonies are observed both in spring and at midsummer. Thus “in Little Russia it used to be the custom at Eastertide to celebrate the funeral of a being called Kostrubonko, the deity of the spring. A circle was formed of singers who moved slowly around a girl who lay on the ground as if dead, and as they went they sang:

until the girl suddenly sprang up, on which the chorus joyfully exclaimed:

At a certain stage of development men seem to have imagined that the means of averting the threatened calamity were in their own hands, and that they could hasten or retard the flight of the seasons by magic art. Accordingly they performed ceremonies and recited spells to make the rain to fall, the sun to shine, animals to multiply, and the fruits of the earth to grow. In course of time the slow advance of knowledge, which has dispelled so many cherished illusions, convinced at least the more thoughtful portion of mankind that the alternations of summer and winter, of spring and autumn, were not merely the result of their own magical rites, but that some deeper cause, some mightier power, was at work behind the shifting scenes of nature. They now pictured to themselves the growth and decay of vegetation, the birth and death of living creatures, as effects of the waxing or waning strength of divine beings, of gods and goddesses, who were born and died, who married and begot children, on the pattern of human life.