Summerbook #6: The View From the Cheap Seats 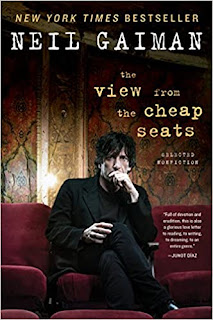 The View From the Cheap Seats: Selected Nonfiction, by Neil Gaiman
Oh, I do like Neil Gaiman, though as usual I'm late to the party.  This is a very long collection of non-fiction -- I have noticed before that absolutely everybody wants him to write introductions.  So I took it fairly slowly and read it over lunches, so as not to overdose.  Gaiman, however, is not easy to overdose on.
The book starts with my very favorite essay, which I would have put in front too, the one about how important libraries are.  I may be a librarian, but since I'm not a writer, I can't defend libraries with quite this much eloquence.  If you've never read this one, be sure to do so.  I gave you the link, so you have no excuse.
After that there are some more good essays on various bookish and writing topics before a set of pieces on 'People I Have Known,' which of course include the expected DWJ, Pterry, and Douglas Adams, as well as lots of other well-known and not so famous people.  (Neil Gaiman, fortunate fellow, has known an incredible number of really neat people, and I felt particularly envious about the Frouds, not to mention Ray Bradbury.)  Then there are sections on SF, films, comics, music, fairy tales...all of the topics you would figure on.
I added quite a few titles to my TBR list; did you know that Kipling wrote horror stories?  Because I didn't.  Other titles went on to my re-reading list, such as American Gods, Sandman, Thurber's The 13 Clocks, and more.  I was happy that he talked about Lud-in-the-Mist, and I might even give The King of Elfland's Daughter a try, even though Lord Dunsany and I do not get along well.  (I was quite tickled to find, however, that Lord Dunsany's name was Edward John Moreton Drax Plunkett; no wonder he used Dunsany.)
I particularly enjoyed an aside pointing out that "European MTV is the only channel in the world worse than American MTV," because having been subjected to large doses of European MTV back in about 1991, to this day I cannot listen to Erasure's "Chorus" or that one song "More Than Words."
Finally there are some really great pieces at the end, one of which is Gaiman's other famous speech, "Make Good Art," plus some other things that I think must have been favorites and things he thought were important.
The favorite bits:

[on the PEN dinner for Charlie Hebdo]  Comics and cartoons can viscerally upset and offend people.  Cartoons and comics get banned and cartoonists get imprisoned and killed.  Some comics are hard to defend, especially if you prefer prettier drawing styles, lack cultural context, or were hoping for subtlety.  But that does not mean that they should not be defended.
[on meeting Terry Pratchett for the first time]   The author, a former journalist, has a hat, but it's a small, black leathery cap, not a Proper Author Hat.  Not yet.  The journalist has a hat too.  It's a grayish thing, sort of like the ones Humphrey Bogart wears in movies, only when the journalist wears it he doesn't look like Humphrey Bogart; he looks like someone wearing a grown-up's hat.  The journalist is slowly discovering that, no matter how hard he tries, he cannot become a hat person; it's not just that it itches and blows off at inconvenient moments, its that he forgets, and leaves it in restaurants, and is now getting very used to knocking on the doors of restaurants about eleven a.m. and asking if they found a hat.  One day, very soon now, the journalist will stop bothering with hats, and decide to buy a black leather jacket instead.
Why do we need the things in books? The poems, the essays, the stories? Authors disagree. Authors are human and fallible and foolish. Stories are lies after all, tales of people who never existed and the things that never actually happened to them. Why should we read them? Why should we care?
The teller and the tale are very different. We must not forget that.
Ideas–written ideas–are special. They are the way we transmit our stories and our thoughts from one generation to the next. If we lose them, we lose our shared history. We lose much of what makes us human. And fiction gives us empathy: it puts us inside the minds of other people, gives us the gift of seeing the world through their eyes. Fiction is a lie that tells us true things, over and over.
[on a letter he received] ...three young men who wanted to know how I could possibly have listed Kipling as a favorite author, given that I was a trendy and enlightened young man and Kipling was, I was informed, a fascist and a racist and a generally evil person.
It was obvious from the letter that they had never actually read any Kipling.  More to the point, they had been told not to....
In truth, Kipling's politics are not mine. But then, it would be a poor sort of world if one were only able to read authors who expressed points of view that one agreed with entirely. It would be a bland sort of world if we could not spend time with people who thought differently, and who saw the world from a different place.
[On Stardust]  I wound up defending it to a journalist who had loved my previous novel, Neverwhere, particularly its social allegories. He had turned Stardust upside down and shaken it, looking for social allegories, and found absolutely nothing of any good purpose.
"What's it for?" he had asked, which is not a question you expect to be asked when you write fiction for a living.
"It's a fairy tale," I told him. "It's like an ice cream. It's to make you feel happy when you finish it."
I don't think that I convinced him, not even a little bit.
Life is sometimes hard. Things go wrong, in life and in love and in business and in friendship and in health and in all the other ways that life can go wrong. And when things get tough, this is what you should do.
Make good art.
I'm serious. Husband runs off with a politician? Make good art. Leg crushed and then eaten by mutated boa constrictor? Make good art. IRS on your trail? Make good art. Cat exploded? Make good art. Somebody on the Internet thinks what you do is stupid or evil or it's all been done before? Make good art. Probably things will work out somehow, and eventually time will take the sting away, but that doesn't matter. Do what only you do best. Make good art.
Make it on the good days too.
And Fifthly, while you are at it, make your art. Do the stuff that only you can do.

So, this is a collection very worth reading if you're a Gaiman fan, but if you are, you've probably already done so.  Good stuff.  I would very much like to meet him someday, but if I ever do, I'll tell him that I really like his stuff but what I really want to talk about is Diana Wynne Jones.
And, finally, because I cannot see or hear the words 'cheap seats' without hearing this song in my head, enjoy:
20 books of summer books essays non-fiction