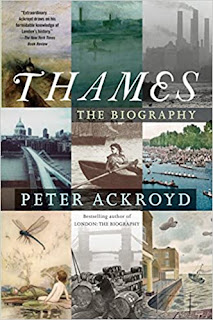 Thames: The Biography, by Peter Ackroyd
I've really been having a very Thames/London/UK-themed month, which wasn't on purpose but has been pretty enjoyable.
Peter Ackroyd is a British writer given to long, meandering historical books, and I've read a couple of them.  I enjoyed Albion pretty well, and London Under was mostly irritating.  I was really looking forward to Thames, and it was interesting.  It was also irritating.  I'd say about 50/50 of each.
It's a solid 400 pages of mixed history, myth, story, and Ackroyd's habit of putting in sentences that sound deep but only sometimes actually mean anything very much.   Any aspect of the river you can think of is in there: river work, river superstitions and traditions, river artists and writers, saints and fish and death.  Ackroyd wants to be comprehensive.
He kicks off with a statement that I find aggravatingly arrogant: that the Thames "can fairly claim to be the most historic (and certainly the most eventful) river in the world."  What, more historic than the Nile?  Than the Ganges?  The Tigris and Euphrates?  You're not selling me here, Peter; I want to enjoy this book but that's not a good start.  The Thames is very very historic indeed, but not more so than the NILE.
Before I complain too much, I do want to say that there was a lot to enjoy in this book.  There are lots of interesting stories, a bit of neat science -- I did like quite a lot of it.  That said, Ackroyd is given to a kind of writerly hyperbole that brings out the worst in me, and I go all pedantic.  I know Robert MacFarlane is the darling of UK writing of place, but I find him too self-consciously poetic, and Ackroyd has a similar problem.  Discussing sedimentary layers in geology, he feels the need to say things like "They are ribbons in the hair of Gaia."
And sometimes he makes scientific claims like this one, on water, that are more poetic hyperbole than fact:  "It is perhaps the oldest thing upon the earth.  It has remained unchanged, in every respect, for 3,500 million years.  The seas were formed in the depths of pre-Cambrian time, and there is not one drop more or less than at that inconceivable beginning."  That sounds neat, but it's not true.  Water molecules are broken apart and formed all the time.
He's prone to speculation and generalization which, again, sounds good but isn't in any way based on anything much, such as his comment on the guy in charge of building Old London Bridge, who died before it was quite finished and was interred in the chapel on the bridge: "His burial here may also have been a recognition of the old superstition that, in the foundations of bridges, a human sacrifice must be laid."
Or "The river was thus closely associated with spiritual authority."  Because there were a lot of meetings in various riverside towns...perhaps because they were convenient to get to?
On speech patterns of the Thames Valley:  "There is a special language of the river...There may be some trace here of a primordial language long since fallen out of customary use, perhaps derived from the Wessex or Mercian tongues."
On really big and ancient yew trees, he just gets his measurements a bit wrong and says that they are 29 and 31 feet in diameter, when he has to mean circumference.  (Why didn't anyone catch this?)
Statements that sound deep but mostly aren't:

The river is the oldest thing in London, and it changes not at all.
We are treading upon prehistory.
The creatures of the Thames share the ritual purity of the flowing waters.  (This was on the old habit of eating fish during fasting, which was not because fish were ritually pure.)
The river may heal that which is broken.  (This is from a bit about modern mudlarks, about which Lara Maiklem was a good deal more useful.  Ackroyd waxes poetic about how the official Thames Mudlarks have special intuitive associations with the river and find special things.)

So, maybe not really my kind of thing, but I'm glad to have read it.  I wouldn't trust Ackroyd's facts farther than I could throw Ackroyd himself, though; if I were writing a paper or something I'd go looking for citations.
20 books of summer English literature history TBR challenge