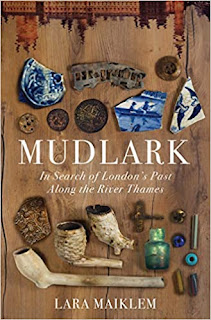 Mudlark: In Search of London's Past Along the River Thames, by Lara Maiklem
The minute I saw this book I knew I had to read it.  And so did my co-worker, so we had to have one of those polite exchanges of "you take it first!"  She'll probably be happy I'm done with it.  This book is right up my alley.  If I lived in London I would absolutely go mudlarking.  If I'd had any clue how, I would have done it when we went on our trip (which, unbelievably, was just four years ago).  I can't understand why people who live in London don't spend all their time poking into odd corners of history, but I suppose they have to work in order to afford living in London.
I do actually have a piece of medieval pottery taken from the Thames by a mudlark; one of the historical buildings we went into had a basket of them.  Pieces like that are very very common and not worth anything.  For one pound you could choose a piece, and the money went to English Heritage (or maybe the other one, who knows).  Mine is red clay, glazed with green and yellow.
Lara Meiklem has always been a collector of old things, and she's been a mudlark for something like fifteen years.  (You can actually follow her on Twitter and Facebook, where she is London Mudlark.)   If you're not familiar with the term, a mudlark was, in the 1800s, a person who combed the shore of the Thames for sellable items like coal and metal; since the river was an open sewer at the time, it was a horrible job.  A modern mudlark combs the shore for interesting bits of history; the riverbed is stuffed with the leavings of centuries.
I had to learn a couple of new and useful terms to read this; Maiklem keeps talking about 'the foreshore' and I had to look it up.  The foreshore is the bit of a beach or shore that gets covered and revealed by the tides; the part that gets wet.  The backshore is the part that stays dry.
In this volume, she starts at Teddington Lock, which is way to the west, not too far downstream from Hampton Court, and is approximately where the river stops having a tide.  The Thames is a tidal river for a long way, and that makes it more interesting.  She continues east along the river, mostly in the middle of London, but giving plenty of time to easterly docks and Greenwich, and ends up right at the estuary, where the river meets the sea.
Maiklem details what it is like to search for treasure in the mud and stones, describes many of her treasures, and discusses riverine erosion and environmental concerns.  The Thames is cleaner and healthier than it's been in a few centuries, but erosion is a constant issue, expedited by the more invasive mudlarks who dig holes.  And a tremendous amount of modern garbage makes it into the water.  Even the sewers still overflow in a heavy rain, but they're building a system to solve that problem.
The history is wonderful, all found in small, battered objects.  Maiklem can talk about anything from a Roman seal, through medieval shoes, Georgian coins, and Victorian toys.  There are countless beads, pins, clay pipes, and coins.  There are animal bones from Elizabethan feasts and all sorts of weird stuff.  It's fabulous.
Unfortunately, I read the hardback edition, which inexplicably does not contain any photos.  The paperback does, so be sure to get that.  I spent a lot of my time either googling things (rose farthings, chevron beads, Bellarmines) or studying satellite images on Google Maps, looking for river stairs, old pier stumps, and the remains of the SS Richard Montgomery.  And of course, Doves type. 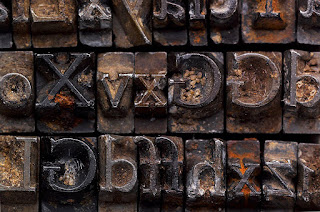 My favorite kind of book and will definitely be making my Best of 2020 list.  (Given how 2020 is going, we're going to need some happy lists.)  I loved it.  I know my oldest kid will love it too, since both of us have mudlarking ambitions anyway.
I only just noticed that I put Peter Ackroyd's "Thames biography" on my 20 Books of Summer list, so I'll read that while I'm in this mood.  What I'd really like to do is read The Way to the Sea, by Caroline Crampton, which is all about the Thames Estuary.  I'll track it down one of these days.
history non-fiction