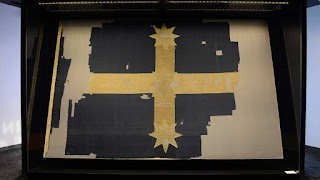 The original Eureka flag
And I can't resist adding a postscript about the little town of Rough and Ready, which I visited last summer.  It's not too far from Grass Valley.  In 1850, the miners there, annoyed over being taxed but not getting any actual services, declared independence from the United States.  This lasted all of three months, until they realized that nobody would sell them liquor for the 4th of July if they weren't Americans.  Check out the story from, again, the Goldfields blog!
Australian literature CC Spin TBR challenge