The Mysteries of Udolpho Readalong: I 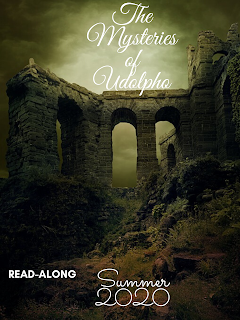 I wasn't sure how often I would do a Udolpho update, but after Volume I seems like a good time!  This has been a pretty good pace for me; I'm not having any trouble keeping up, but it doesn't feel like a massive burden.
The plot so far: Emily St. Aubert and her parents live quietly at their estate, enjoying nature, reading, and music, until the death of Madame St. Aubert.  Emily and her father decide to take a tour of the mountains, and on the way they meet a respectable young man, Valancourt.  They all enjoy the scenery together for a while, and Emily and Valancourt get along wonderfully, but nothing is said for the moment.  Once Emily and her father are on their own again, he gets sick and dies, and Emily is left to manage on her own.
Once at home, Emily carries out the last wishes of her father: that she find some hidden papers and burn them without reading them.  Of course, she inadvertently reads a sentence, and its implication is frightening, but she did promise, so she burns the paper.  What mystery could have lain within?    Soon Valancourt shows up in hopes of courting her, and she has to tell him that she's on her own now and he'll have to wait until she's with her aunt, the vain, frivolous, and mercenary Madame Cheron.
Madame Cheron at first pegs Valancourt as penniless, and shoves him off...until she finds out that he's the nephew of a very rich and influential lady, so he becomes welcome.  She tries to shove the wedding through faster than anybody wants, until the very last minute, when she takes over all the wedding preparations for herself!  All of a sudden everything has changed.  No longer may Emily and Valancourt wed; Emily's going to be whisked off to Italy.  Will the lovers ever see each other again?
There is so much scenery.  Incredible amounts of scenery.  Mountains, forests, and cataracts abound, and they're carefully described, which must have been pretty good stuff if you were a young miss in Kent who never got to go anywhere much.  One thing puzzled me, though, as you can see:

When weary of sauntering among cliffs that seemed scarcely accessible but to the steps of the enthusiast, and where no track appeared on the vegetation, but what the foot of the izard had left; they would seek one of those green recesses, which so beautifully adorn the bosom of these mountains, where, under the shade of the lofty larch, or cedar, they enjoyed their simple repast, made sweeter by the waters of the cool stream, that crept along the turf, and by the breath of wild flowers and aromatic plants, that fringed the rocks, and inlaid the grass.
Emily wished to trip along the turf, so green and bright with dew, and to taste the full delight of that liberty, which the izard seemed to enjoy as he bounded along the brow of the cliffs;

The first time I saw izard mentioned, I thought that it might mean lizard, but the second time...lizards don't bound along cliffs.  So what on earth is an izard??  It turns out to be the Pyrenean chamois, a kind of mountain goat or antelope, and I suppose it's pronounced i-ZARD, not IH-zard, as it is in my brain.  Izards were hunted nearly to extinction in the 1940s -- for the soft leather -- but the population is now recovering fairly well.
Besides wandering in the mountains and admiring the sublime views, Emily also enjoys sitting at the window, looking at scenery and thinking high-minded thoughts.
Nothing very wild happens until the very end of volume I, and even that is unexpected, rude, and ominous, but not bonkers.  For one thing, Mrs. Radcliffe didn't believe in writing off-the-rails Gothic novels; she believed in promoting common sense, intelligence, and virtue, so this is no Monk.  (Remember the Monk-along?  Good times!)  Mrs. Radcliffe also didn't believe in blatant anti-Catholicism, just the subtle kind, so the nuns we meet have so far all been very kind and hospitable, although is it morally proper for Emily to refuse their invitation to join their convent (there's a quotation about that below).
However, Madame Cheron's boyfriend Signor Montoni is clearly not going to be a good guy.  Emily is full of good sense and courage, so I believe in her ability to overcome!  I'm pretty sure she'll spend the entire second volume in dire straits.
Here are some quotations I noted:

She [Emily] had discovered in her early years uncommon delicacy of mind, warm affections, and ready benevolence; but with these was observable a degree of susceptibility too exquisite to admit of lasting peace. As she advanced in youth, this sensibility gave a pensive tone to her spirits, and a softness to her manner, which added grace to beauty, and rendered her a very interesting object to persons of a congenial disposition. But St. Aubert had too much good sense to prefer a charm to a virtue; and had penetration enough to see, that this charm was too dangerous to its possessor to be allowed the character of a blessing. He endeavoured, therefore, to strengthen her mind; to enure her to habits of self-command; to teach her to reject the first impulse of her feelings, and to look, with cool examination, upon the disappointments he sometimes threw in her way. While he instructed her to resist first impressions, and to acquire that steady dignity of mind, that can alone counterbalance the passions, and bear us, as far as is compatible with our nature, above the reach of circumstances, he taught himself a lesson of fortitude; for he was often obliged to witness, with seeming indifference, the tears and struggles which his caution occasioned her.
During her stay at the convent, the peace and sanctity that reigned within, the tranquil beauty of the scenery without, and the delicate attentions of the abbess and the nuns, were circumstances so soothing to her mind, that they almost tempted her to leave a world, where she had lost her dearest friends, and devote herself to the cloister, in a spot, rendered sacred to her by containing the tomb of St. Aubert. The pensive enthusiasm, too, so natural to her temper, had spread a beautiful illusion over the sanctified retirement of a nun, that almost hid from her view the selfishness of its security. But the touches, which a melancholy fancy, slightly tinctured with superstition, gave to the monastic scene, began to fade, as her spirits revived, and brought once more to her heart an image, which had only transiently been banished thence. By this she was silently awakened to hope and comfort and sweet affections; visions of happiness gleamed faintly at a distance, and, though she knew them to be illusions, she could not resolve to shut them out for ever. It was the remembrance of Valancourt, of his taste, his genius, and of the countenance which glowed with both, that, perhaps, alone determined her to return to the world.
As she mused she saw the door slowly open, and a rustling sound in a remote part of the room startled her. Through the dusk she thought she perceived something move. The subject she had been considering, and the present tone of her spirits, which made her imagination respond to every impression of her senses, gave her a sudden terror of something supernatural. She sat for a moment motionless, and then, her dissipated reason returning, “What should I fear?” said she. “If the spirits of those we love ever return to us, it is in kindness.”

So, the nuns are very kind, but in the end, their lives are "selfish," which I must say is an adjective I've never heard applied to nuns before!  Also, St. Aubert asks Emily to burn the papers because they would make her unhappy, and then she complies because she made a promise.  For myself, I'd rather know unpalatable truths than be protected in ignorance, but that was considered proper back in the day, and nobody asked Emily's opinion about it.  I'm looking forward to what befalls our young heroine next!
20 books of summer English literature Gothic lit Readalongs TBR challenge