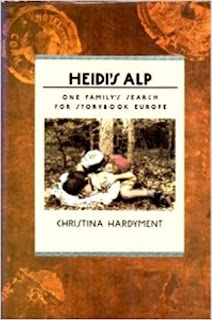 Way back in 1985, this British family borrowed a camper-van, bundled their four daughters in, and took weeks to drive around Europe on a storybook-themed trip.  Hardyment, the mom, wrote up this lovely book to tell the story.
Obviously it was a tricky proposition to take that much time off, so what they actually did was start the trip with Mom and four daughters, plus a friend and her year-old baby.  After a few weeks, the friend and baby went home and Dad joined them.  Mom being a writer, she seems to have been able to pull off the long trip.
They start in Holland, with Hans Brinker (which I have actually never read, I really should), exploring the cities and dikes of the Netherlands.  Then it's off to Denmark, where Hans Christian Andersen will be a major guide on the trip; they first visit Legoland, Odense, and Kronborg (that's the castle at Helsingør, Hamlet's Elsinore).  This gave me lots of happy moments, since she's describing places I visited at about the same time.*  They then follow HCA into Germany, stopping at Hamelin for the Pied Piper, and trekking into the Harz Mountains, even into East Germany!  There is a very exciting moment in which they try to drive up the most famous peak, only to be stopped by a DDR soldier who anxiously tries to find the words to say "top secret."
On the whole, Hardyment is a bit hard on Germany, I thought.  She finds West Germans to be bourgeois and complacent, and dislikes sugary tourist traps like Neuschwanstein.  Some of it rubbed me the wrong way.
Then it's off to Italy and the land of Pinocchio and Venice, which are mostly good successes.  I want to go to the Pinocchio park now.  And the greatest part of the trip is traveling to Maienfeld and hiking up into Heidi country, where they find meadows, goats, and even an Alm-Uncle in a cottage, who invites them to stay the night.  After that they are pretty tired, so they noodle around France for a bit before heading home and skip Paris.
I really enjoyed most of this account.  I've always wanted to do something like this myself, of course, so I was hugely envious for most of it.  Hardyment describes everything wonderfully; there's a lot about the children and living in a camper-van (and a few good tips, if you're a parent wanting to travel).  It's a lovely book and I'm glad I accidentally found a copy on the donation table.
Also, I definitely need to read The Wind in the Willows again this summer.  Toad and his traveling-cart also figure here, and in general Toad, Mole, and Rat are hovering around, asking to be read. 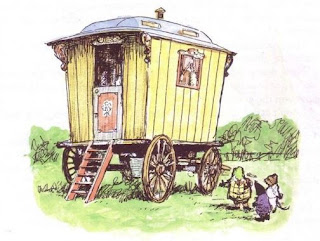 --------------------------------------
* Now I shall be self-indulgent and tell you about the Danish part of the book.  It was so fun to read about a visit to Legoland that was just like my own visit; we had a week in May in which all the exchange students piled on a bus together and drove around, visiting places.  So I too got my Legoland driver's license as described in the book -- of course we were much too old for it but what is more fun for a bunch of teenagers than doing something they are much too old for?  I too have been to HCA's house and listened to the story phones, and I've been to Kronborg to see Holger Danske.  So that was just a lot of fun for me.  So here are some photos, which are really just pictures of photos in an album:
books children's literature TBR challenge travel