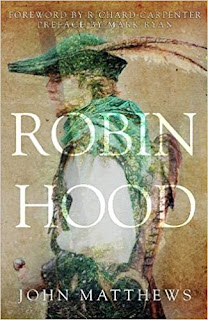 Robin Hood: Green Lord of the Wildwood, by John Matthews
A little while ago, I had to buy a 'history of Robin Hood' book for the college library to replace the one that had been lost.  It's a little tricky to purchase something like that, because you know the majority of what's out there is going to be...kind of woo-ey.  This looked like the best of the bunch.  And then one day I was in the mood to read about Robin Hood, so I brought it home for the quarantine and gave it a try.  I do think it's a little bit woo-ey, but mostly not -- and although he walks right on the border, usually when he crosses over and quotes something really out there, he points out that it's wild speculation and seems unlikely.  I'm not entirely sure how seriously to take it, but it was pretty interesting.
I was expecting more of a literary/dramatic history of Robin Hood, and what I actually got bore a startling resemblance to The Golden Bough.  Matthews figures Robin Hood is kind of an amalgam of people and legend; probably more than one outlaw took on the name Robin Hood because it was known, but the figure of Robin also gets mixed up and in with all kinds of other things like Jack-in-the-Green, the Green Man, trickster figures, and it all goes back to that favorite theme -- folk magic and rituals around the forces of nature.  He thinks of Robin as an aspect of unbridled, wild Nature with a capital N and the birth of spring.
So we go through a whole bunch of examples of practices and legends, mostly connected with May festivals, which (I didn't know) were often called Robin Hood games.  Morris dances* and the traditional characters connected with them, fertility folk practices of various kinds, stories about mummers and flower brides and so on.
And it ends up with Robin Hood and Maid Marian being King and Queen of the May, connected to much older things behind that.  Some of it I found persuasive, some of it not so much.
The text itself is only a couple of hundred pages; the second half of the book consists of a tremendous number of Robin Hood ballads, arranged as chronologically as possible.
It was very interesting.  I had fun, even if I didn't buy everything he was selling.
Reading this book put me in the mood to watch Robin Hood, or maybe The Court Jester, which is a favorite of mine.  Of course, if you live around these parts, there's only one Robin Hood movie -- the one with Errol Flynn and Olivia de Havilland.  A lot of the Sherwood Forest bits were filmed here in our park, and the Merry Men hang out in the Hooker Oak -- a massive tree which has been gone for 40 years, but remains prominent in city history and affection.
-----------------------------------------------------
*At some point along this path I looked up the Abbots Bromley Horn Dance, which is a Morris dance where they wear these antlers.  It's been going continuously for centuries, and the 'horns' are actually reindeer antlers -- which have been carbon-dated to about a thousand years ago.  So that blew my mind.
English literature folklore history mythology poetry