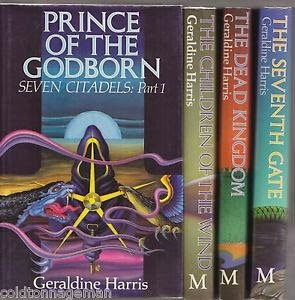 I read these books over and over as a kid; the library had all four in first editions (with their awesome freaky cover art, way better than the paperbacks), and I thought they were really good.  They've been out of print for about 30 years now, but I thought of them recently and looked around, and they've been released as e-books on Kindle.  With the Worst Covers Ever, but what are you going to do--e-books.  Still, these are really atrocious.  Don't let that stop you!  The Seven Citadels is great fantasy writing, and I really wish they would come back into print properly.  When I finished the last volume, I finally noticed that there's a highly complimentary blurb from DWJ on the back flap of the book jacket! 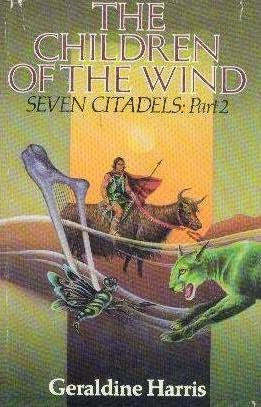 Kerish-lo-Taan is the youngest and favorite son of the Emperor of Galkis--a kingdom ruled by the Godborn, who claim special dispensation and abilities from their ancestor.  Galkis was once a beautiful and just kingdom, but the Godborn have fallen deeply into corruption and the empire is crumbling.  Kerish's father has retreated into his garden and rules--barely--from his seclusion; the rest of the court fights for power.  Kerish is a spoiled and temperamental, but idealistic, young man, and he and his sturdier half-brother Forollkin set out on a quest to free the Savior, legendarily imprisoned behind seven locked gates.  It is Kerish's task to collect the keys from seven sorcerers, who are granted immortality as long as they possess them.  So off they go to wander the world -- or at least the continent -- of Zindar, which contains many peoples and strange lands.

Kerish and Forollkin are classic opposite numbers; brothers, best friends, yet opposites and with a lot of anger not-so-hidden away.  Kerish's resentful struggle to be accepted as an adult and equal, and Forollkin's over-protective and jealous feelings towards his brother make for the central tension in the story.  There are many vivid supporting characters along the way; everyone is finely but compactly drawn.  The most important of the companions they pick up along the way is Gidjabolgo, who was a slave and jester -- his amazing ugliness meant a lifetime of abuse, and he fights back with his incredibly acidic tongue.
The quest actually takes about three years, and Kerish grows from a petulant teenager into a generous, strong, and loving young man whose great desire is to understand other people.  The last volume contains some very unexpected developments, including a glimpse into the society that existed before humans came to Zindar.  The whole thing is well worth reading and I wish it were better-known. 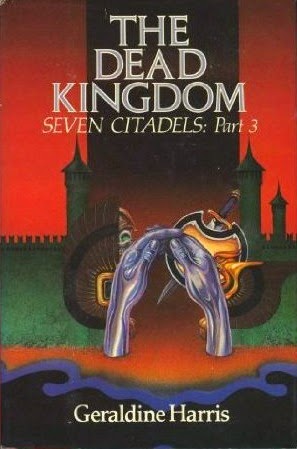 Even when I read these as a kid, having never had any contact with Japanese anime except G-Force, Kerish looked a lot like an anime character in my head--he's described in terms that make that natural, I think.  Reading the series now, I was impressed with how very visual the writing is; Harris describes everything in beautiful, vivid language (yet without making this a book made largely of scenery).  Honestly, this would make a fantastic anime series.  You wouldn't have to change a thing.  It's ideally suited for the style.  By the end of the first volume, I was purposely imagining every character and scene in anime, and it completely worked.  So, somebody tell an anime producer, and I'll be happy with a reasonable finder's fee...