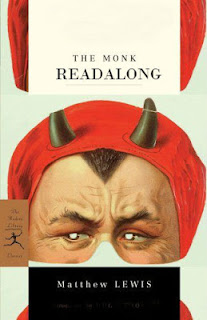 It's the first installment of the Monkalong!  Reading Rambo is hosting the activity, and she says "COME READ THIS 1796 NOVEL WITH US. It's bonkers."  Which is true enough.

I've read the first two chapters, and it's already getting pretty crazy.  So far, we have three pairs:

Antonia is 15 (at most) and Don Lorenzo spots her at church.  She's pretty cute, although not rich, so Don Lorenzo figures she would make a good wife.  Then he has a dream-vision in which she is tormented by evil and taken up to heaven.

Agnes and Don Raymond are in love, but Agnes thought he'd left her, so she entered a convent.  When Don Raymond came back, she started meeting him secretly.  Now she's pregnant and planning to elope, unless the prioress catches her first.  Agnes is also Don Lorenzo's sister!

Ambrosius is the incredibly clean-living young abbot of the monastery.  His preaching is all the rage and he's in great demand.  Unfortunately, Ambrosius is steeped in pride (the mother of all sins!) and far too complacent about his own virtue.  His best buddy and young acolyte, Rosario, is equally devout and virtuous, but aha! reveals that he is in fact Matilda, a beautiful young woman hopelessly in love with Ambrosius.  Matilda has some issues she needs to deal with.  She wants Ambrosius to keep her with him always--they can be chaste companions in devotion!--and when he thinks that might not be such a good idea, she threatens to kill herself, rending her robe and putting a dagger to her breast.  The sight of "the beauteous Orb" gives Ambrosius some very troubling second thoughts, but the next day they agree to part forever.  But!  When Ambrosius goes to pluck a rose to give Matilda as a memento, he is bitten by a deadly snake!  Matilda cures his illness by sucking out the venom, and then sickens herself.  She can only survive if Ambrosius succumbs to her considerable charms, which he does.

I never heard of that cure for snake venom before.

Oh, I forgot; Matilda also had her portrait painted as the Madonna and manipulated the monastery into buying it, so that Ambrosius has been adoring it for months.  (As Rosario, she always kept her cowl over her face so nobody ever saw it.  I don't know how she managed to see anything.)

This is all happening in Madrid, by the way.

So far it's all pretty goofy and fun.  I'm pretty sure it's going to get way crazier soon!
English literature Gothic lit Readalongs