Classics Club Spin: A Bend in the River 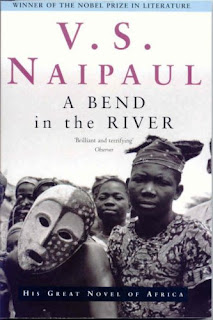 A Bend in the River, by V. S. Naipaul

This was my Classics Club Spin title!  V. S. Naipaul is a British writer, born in Trinidad, who started off writing Trinidad-based novels and moved to international waters.  He's pretty international himself, being of Nepalese descent by way of India and Trinidad.  He has won a Booker Prize, a Nobel, and a knighthood.

A Bend in the River, published in 1979, describes ordinary life in modern, post-colonial Africa through the eyes of one man.  He does little himself; he is an observer of the events around him.  The location is deliberately general; it's not too far from Uganda and South Africa, and inland, so I guessed at western Tanzania, but the point is that it's Post-Colonial Anywhere, Africa.  The colonial government is gone, there has been violence, and now a new president promises a new life, but he progresses from popular leader to tyrant.  Naipaul shows us what that looks like for the ordinary people of a small town.

The narrator, Salim, is an outsider.  He is part of a once-wealthy Arabic family that has lived on the east coast of Africa for generations; they are acclimated, but not fully African.  Salim seeks his fortune by purchasing a general store; the inland town at the bend of the river has been destroyed by the violence accompanying independence and the ejection of European officials, but it's a natural trading location and he can expect the business to revive over time.  So at first he's living in a burned-out wasteland with just a few other inhabitants, but he ekes out a living selling useful items to the villagers who come down the river to trade.

As the town slowly revives and grows, Salim gets to know people at all levels of society.  Each of the new president's actions have a strong effect on the town as he establishes a college, or brings in military troops, and so on.  Salim is introduced to Raymond, a European scholar of Africa who has been serving as an advisor to the president but is now being shoved to the side.  Raymond has studied and written on important African issues for years, but Salim comes to realize that he only understands the top layer of events--what the newspapers spin--and has no idea what people truly think or feel.  Salim is an outsider, but he's a lot closer in than Raymond, who doesn't really understand anything at all.

As the country's condition deteriorates and violence revisits Salim's town, he remains passive.  Salim almost never does anything himself; he simply watches.

I am in the middle of a book about underbelly of India. It is so depressing. I should balance it with a good old mystery or something light and enjoyable. Your book would go onto the pile of depressing-sounding books that would threaten to swamp me.

I read Great Expectations. It was my first Dickens since childhood.

Naipaul is a writer I always mean to read but haven't yet. Thanks for the review!

I tried to read this book years ago and couldn't get into it. I think I should try again.

I'm not a big fan of this novel, but it gave some insight on a time and place I know little of.

That sums up my feelings pretty well! :)