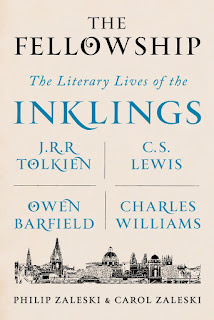 The Fellowship: the Literary Lives of the Inklings, by Philip and Carol Zaleski

The Zaleskis have written a sort of group biography of the four main Inklings: C. S. Lewis, Charles Williams, J. R. R. Tolkien, and Owen Barfield.  They only touch very lightly on other members of the group, and really Lewis and Tolkien take up the lion's share of the space.

The subjects are tackled sort of chronologically, so you skip between childhoods and educations.  If you are already a big Lewis/Tolkien fan, you will know quite a bit of the material, but the Zaleskis have a solid common-sense approach to the wishes and speculations that have built up around the two in the last 50 years or so, which is a nice help.

Where I mostly learned a lot was in the material about Barfield and Williams.  I've read some of their writings, so I was not totally unfamiliar with them, but I didn't know much.  Barfield was a talented man whose talents were not what people wanted.  For one thing, he was an enthusiastic follower of Rudolf Steiner* and Anthroposophy and he wanted to share those insights with an uninterested world.  Poor Barfield also spent much of his adult life trapped (as he saw it) working in a law office, which he mostly hated.

Charles Williams--well, I knew he was kind of an oddball, but wow.  He had some issues!  Williams was quite a strange person, charismatic, high-strung, manic, and troubled.  He invented some very interesting theology and Lewis had a tendency to think that he was more amazing than he actually was.  I liked the Zaleskis' descriptions of his novels as "highbrow pulp**," which is pretty good, and of his poetry as often "a nearly impenetrable thicket of obscurities."

The Zaleskis also take a good look at the Inklings' place in literature and history.  Christians all, they fostered something of a revival, but they also garnered a good deal of scorn from those who thought they were too escapist.  The authors reply:


Yet although the Inklings were guilty of the heresy of the Happy Ending, they were not optimists; they were war writers who understood that sacrifices must be made and that not all wounds will be healed in this life.  Their belief in the Happy Ending was compatible with considerable anguish and uncertainty here below.  One may be as gloomy as Puddleglum or as convinced as Frodo that "All my choices have proved ill" without losing hope in a final redemption.

It's a very interesting book and I enjoyed it quite a bit.  But it's huge and fairly exhaustive, so most likely only big Inklings fans will want to read it.

*The only remnant of Steiner's teachings you will find in the popular realm today is Waldorf education.  But Steiner was a hugely prolific writer/philosopher, and wrote about all sorts of things, from dance to Lemuria and Atlantis to the nature of the universe.

**A phrase which reminds me of that movie, Dead Again, with a cast of highbrow British actors and a B-movie plot.