We Believe the Children 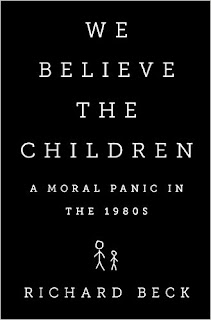 We Believe the Children: A Moral Panic in the 1980s, by Richard Beck

Readers who were around in the mid-80s may remember that a lot of people were worried about Satanic ritual abuse of children, particularly preschool-aged children in daycare.  Some daycares were accused of being centers of ritual abuse; the children were interrogated, evidence searched for, and a lot of people went to jail.    This was big stuff, people.

And it was almost entirely made up.  These huge, publicized cases were sparked by one person worried about a child--in at least one case, by a person with severe mental problems--and blew up into hysteria.  Almost certainly, some children who had actually been subjected to abuse were lost under the mountain of false conjecture and panic that mounted up.

Richard Beck has written up a history of the most publicized cases in which he also tries to explain--not really very satisfactorily--why this all happened.  I think that's the question we'd all like an answer for, but I'm not sure there is one.

Therapists and police questioned children--well, what they really seem to have done is badgered the kids until they gave in and made stuff up.  The rallying cry was "we believe the children," but the children were only believed if they produced elaborate stories that confirmed what the authorities thought.  The short excerpts of transcripts included in the book are awful to read, because it's so obvious that there is bullying and leading going on.  The scarier and more elaborate the stories, the more approval the children received, and so they came up with lots of amazing stuff (that would, incidentally, never fit into the few hours they spent at preschool; one kid said he'd been taken out of state in a plane).

Everybody went and searched for evidence--remains of sacrificed animals or babies, underground tunnels, elaborate costumes, weapons, and collections--and there was nothing.

The court cases dragged on for years and ruined quite a few lives; not only for the accused, but for many others too.  Imagine being a jury member!  Eventually much of it collapsed and some people were acquitted.  Others went to jail but were eventually cleared, or perhaps went free but remained registered as offenders.  Still others remain in jail today.

Still, it became an article of faith for many people that ritual abuse was a real thing that happened to children; I can recall that some adults I knew considered it to be a reasonable thing to fear.  The daycare panic led straight into the recovered-memory phenomenon of the 90s, in which adults went under hypnosis to recall their own ritual abuse as small children, this time usually perpetrated by their families.  Recovered-memory therapists considered almost anything to be evidence of repressed memories of abuse (thinking you had not been abused was one indicator) and this abuse was almost always supposed to be elaborately Satanic.  There was also a slightly less major panic about teens getting into Satanism and murdering people, often in obedience to death-metal bands.

Beck gives some fascinating description of all this.  He also delves into some history of psychotherapy, which I at least found helpful and relevant, especially in regards to multiple personality disorder.  He does also have an obvious bias, though, blaming all this hysteria on an anti-feminism backlash to the chaos of the 60s and 70s, and on the toxic nuclear family.  It becomes really obvious that he doesn't like the nuclear family one bit, though I'm unclear about what he'd like to replace it with...or really, several other things about his theories.  That's by far the weakest part of the book.

So here is the personal part.  I was very interested in this book, and in the whole issue of the ritual abuse panics, because I knew some people who believed it.  Reading this book was a very strange experience in some ways, really--it turns out that the first case started in Bakersfield, where we lived when I was a kid; we moved away just as it broke in the media.  (My mom says she read the accusations, but thought that nobody must know much about how preschools work--it all sounded so impractical.)

Much more to the point, when I was a teen, a family I knew fairly well believed that their youngest child had been subjected to Satanic abuse.  I never heard anything about a court case or publicity.  But I heard the story from the mother herself, and I believed her.  (I'll always tell you that my hometown contains a remarkably high percentage of really crazy things, and I can think of other moms who I would not have believed, but I considered her to be a sensible person.)  They moved and did not tell anyone where they went, but for at least the next 15 years, they continued to move periodically, believing that a network of Satanists were persecuting them.  I have no idea what to make of this now.  I've been wondering about it for a good ten years.  What was the real story there?

I, um, also managed to be a bit acquainted with a kid who actually was involved in a Satanic murder.  Reading this book made me realize that probably not everybody has these weirdo experiences in their background; I'd never really thought about it before.

So: read up on a strange chapter of recent American history, mentally argue (or agree if you want) with Beck's reasoning, and please comment below if you remember this happening.  Tell me I'm not the only one!
non-fiction