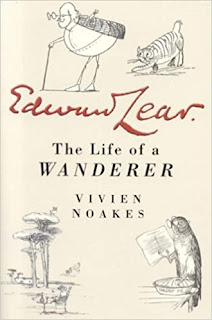 This one got on my list because of the Slightly Foxed podcast, which luckily is only monthly, because it usually adds at least one book to my wishlist.  When I looked this one up, I was pleasantly surprised to discover it in our library collection at work.  So I took it right home.
I only know Edward Lear as a writer of nonsense verse, but that isn't what he did for a living.  And he was just a lovely man, but he had a really difficult life.  So here we go...
Edward was the 20th child of his very tired mother (she had 22!!! and a lot of them died), and after he was about 4, she left him to his older sister.  The sister was kind and loving, but the poor little guy was devastated, and his parents had an awful marriage.  That and a couple other things he never talked about just blighted his life; he was terribly lonely, yet couldn't really contemplate living with anyone.
He also had epilepsy, which at the time was a terribly shameful condition.  People were only just barely beginning to realize that it wasn't actual demonic possession.  Regular work and exercise were the best thing for keeping seizures at bay, but they were still frequent.  Fortunately, he could feel them coming on, and so managed to keep his condition a complete secret from all his friends.  This was another factor that kept him alone; if he'd really shared a home, he would have had to tell.
Young Edward wanted to be a painter, but could not afford the expensive Academy education, and started by doing botanical illustrations, moving on to birds.  He produced wonderful paintings of various parrot species.  Then he started traveling in order to draw and paint various landscapes, and decided that his vocation was to be a landscape painter.  There were a couple of problems, though; without the technical education he needed, he was not very good at drawing people, nor could he paint well in oils.  He came upon the scene just as landscape painting was losing popularity in favor of Millais' rather sentimental tableaux.  Lear's exact and delicate watercolors couldn't be printed in books very well, either.  He did do several books, but the images had to be re-done in another format, which was expensive and could only achieve an approximation.  Still, mid-Victorian English people had a massive appetite for information about other lands that we probably can't even fathom, blessed as we are to have color photos of any place on earth (or off it!).
So he spent his years traveling a lot and painting.  Lear couldn't stand the English winters, which meant that he could never find a permanent home; Corfu was as close as he ever got, but it was difficult, because his friend Lushington was there too, and while Lear was quietly in love with Lushington, his feelings were not reciprocated.  Lear also contemplated marriage, but could never take the plunge.  He considered Emily Tennyson his ideal, but she was already married to Tennyson.
But this biography is not one of unrelenting loneliness and tragedy!  Lear was beloved by his many friends, and because he had been so miserable himself as a child, he loved to make people laugh.  He had a gift for sympathy and wanted to make people happy.  There are innumerable funny stories, my favorite being the one where his friend got a prestigious job, and he was so thrilled at the news (which he read while eating breakfast in an Italian pensione) that he grabbed a little fish off the plate and danced around the room with it...until he noticed the family sitting in a nook, eating their own breakfast.  Luckily they were easygoing Italians, and everyone had a good laugh.  (I also liked the one about the fellow in the train who informed Lear with great confidence that this fictional 'Edward Lear' person was really a pseudonym for the Earl of Darby.)
I did really enjoy this biography, which I have now talked about so much that you might feel that you've already got enough information.  Don't let that stop you; it's a really lovely book about a man who turned his many personal tragedies into an ability to love and sympathize with others.
20 books of summer art memoir/biography poetry