By Jean - July 29, 2020
The Uncommercial Traveller, by Charles Dickens
This is one of my oldest TBRs!  It's been sitting around forever.  These are essays published over years in Dickens' magazine, All the Year Round.  His conceit is that instead of being a commercial traveller (a traveling salesman), he's an UNcommercial traveller, always wandering around looking for a story.  So these are portraits of situations or places, mostly in London but sometimes elsewhere.
Dickens starts off with a bang, being present at the aftermath of a tragic shipwreck off the coast of Wales, and chronicling the tremendous care and work the locals give to the situation.  Then it's off to an assortment of places -- a tour of the Wapping workhouse, the lead-mills, or the gigantic dockyards, interviews with mistreated English soldiers or destitute families looking for work.  He explores a Stepney school for pauper children, of which he highly approves because they're so well cared-for.  He rants about street gangs and the lack of care for homeless children, and produces tiny vignettes of odd people, like the elderly couple making hay in a bitty little churchyard.
One of the more famous essays -- in my circle, at least -- is a fairly entertaining tour of an emigrant ship, the Amazon, which is filled with hundreds of Mormons on their way to Salt Lake City.  Dickens is bewildered by them.  Mormons are clearly lunatics, and he expects to see a bunch of rabble.  He's puzzled to find that the group is organized and respectable. 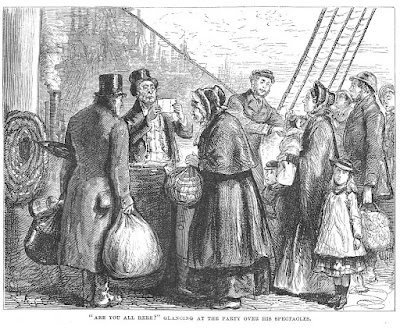 My copy is a cheap little volume from a 'complete Dickens' set printed in 1900.  It's bound in red leather, but only just barely -- it's incredibly thin leather -- and manages to get over 450 pages into a volume that is maybe 3/4" thick.  So it took me quite a time to read, longer than I thought it would; there are 36 longish essays in here.  It's a fun collection, containing a lot of very opinionated Dickens.
Some favorite quotations, often very funny:
The aunt and nephew in this City church are much disturbed by the sniggering boys.  The nephew is himself a boy, and the sniggerers tempt him to secular thoughts of marbles and string, by secretly offering such commodities to his distant contemplation.  This young Saint Anthony for a while resists, but presently becomes a backslider, and in dumb show defies the sniggerers to ‘heave’ a marble or two in his direction.  Here in he is detected by the aunt (a rigorous reduced gentlewoman who has the charge of offices), and I perceive that worthy relative to poke him in the side, with the corrugated hooked handle of an ancient umbrella.  The nephew revenges himself for this, by holding his breath and terrifying his kinswoman with the dread belief that he has made up his mind to burst.  Regardless of whispers and shakes, he swells and becomes discoloured, and yet again swells and becomes discoloured, until the aunt can bear it no longer, but leads him out, with no visible neck, and with his eyes going before him like a prawn’s.

There are not many places that I find it more agreeable to revisit when I am in an idle mood, than some places to which I have never been.  For, my acquaintance with those spots is of such long standing, and has ripened into an intimacy of so affectionate a nature, that I take a particular interest in assuring myself that they are unchanged.  I never was in Robinson Crusoe’s Island, yet I frequently return there....

...on my twenty-first birthday I gave a party, and She was there.  It was a beautiful party.  There was not a single animate or inanimate object connected with it (except the company and myself) that I had ever seen before.  Everything was hired, and the mercenaries in attendance were profound strangers to me.  Behind a door, in the crumby part of the night when wine-glasses were to be found in unexpected spots, I spoke to Her—spoke out to Her.  What passed, I cannot as a man of honour reveal.  She was all angelical gentleness, but a word was mentioned—a short and dreadful word of three letters, beginning with a B— which, as I remarked at the moment, ‘scorched my brain.’  She went away soon afterwards, and when the hollow throng (though to be sure it was no fault of theirs) dispersed, I issued forth, with a dissipated scorner, and, as I mentioned expressly to him, ‘sought oblivion.’  It was found, with a dreadful headache in it, but it didn’t last; for, in the shaming light of next day’s noon, I raised my heavy head in bed, looking back to the birthdays behind me, and tracking the circle by which I had got round, after all, to the bitter powder and the wretchedness again.

I make bold to go aboard a transport ship (iron screw) just sent in from the contractor’s yard to be inspected and passed.  She is a very gratifying experience, in the simplicity and humanity of her arrangements for troops, in her provision for light and air and cleanliness, and in her care for women and children.  It occurs to me, as I explore her, that I would require a handsome sum of money to go aboard her, at midnight by the Dockyard bell, and stay aboard alone till morning; for surely she must be haunted by a crowd of ghosts of obstinate old martinets, mournfully flapping their cherubic epaulettes over the changed times.

...my sponge being left behind at the last Hotel, I made the tour of the little town to buy another.  In the small sunny shops—mercers, opticians, and druggist-grocers, with here and there an emporium of religious images—the gravest of old spectacled Flemish husbands and wives sat contemplating one another across bare counters, while the wasps, who seemed to have taken military possession of the town, and to have placed it under wasp-martial law, executed warlike manœuvres in the windows.  Other shops the wasps had entirely to themselves, and nobody cared and nobody came when I beat with a five-franc piece upon the board of custom.  What I sought was no more to be found than if I had sought a nugget of Californian gold: so I went, spongeless, to pass the evening with the Family P. Salcy.

My journeys as Uncommercial Traveller for the firm of Human-Interest Brothers have not slackened since I last reported of them, but have kept me continually on the move.  I remain in the same idle employment.  I never solicit an order, I never get any commission, I am the rolling stone that gathers no moss,—unless any should by chance be found among these samples.

[He ponders upon]...the existence of a polished state of society that bore with the public savagery of neglected children in the streets of its capital city, and was proud of its power by sea and land, and never used its power to seize and save them!