Summerbook #8: The Spy and the Traitor 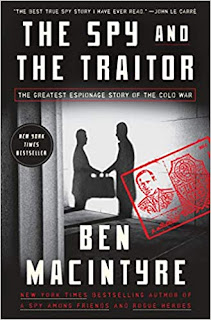 The Spy and the Traitor: The Greatest Espionage Story of the Cold War, by Ben MacIntyre
I was slightly surprised to find that the subject of this book probably actually is the greatest espionage story of the Cold War.  It's a pretty gripping story, anyway.
Oleg Gordievsky grew up in a KGB family; his father was an officer, and it was natural for Oleg and his older brother to join up as well.  But the building of the Berlin Wall gave him serious pause.  He became interested in dissident thought, and when he was posted to Copenhagen, he fell in love with the freedom and clean, cheerful city where everything worked.  He could read whatever he wanted and listen to the music he loved.  When the Prague Spring was so brutally suppressed in 1968, Gordievsky was appalled and became utterly disenchanted with the Soviet system.  He started to think it might be a good idea to help Western countries instead of his own.
It took quite some time, but Gordievsky started to give information to the Danish intelligence organization (PET) and MI6.  He wasn't interested in money; he genuinely felt that the Soviet government was wrong and that he should do his best to bring it down.  And so he passed enormous amounts of valuable KGB information to MI6.  He did this for years, first in Denmark, and later, after several years back in the USSR, from a new posting in London.  He even became the London rezident -- very briefly, until he was identified by a CIA spy, Arthur Ames, who had decided that he needed a lot more money.
Gordievsky's escape from the USSR is a hair-raising story; and, despite what MacGyver taught us, it's unique in the history of the KGB.  No one else ever escaped.  The tragic part was that Gordievsky had to make the wrenching decision to leave his much-loved wife and children.  After about six years, they were reunited, but the marriage did not survive; although Gordievsky's dream had been to defect while still in the West and live happily with his family in the UK, he wound up in a position where he had no choice but to give up his family for their safety.  MacIntyre describes him as "one of the bravest people I have ever met, and one of the loneliest."
Anybody interested in the Cold War and Soviet history would enjoy this detailed and fascinating story.
Some bits and bobs:

[A British description of two Danish intelligence officers]  "Jens was small with a large fair mustache.  Winter was enormous, roughly the size of a large door.  I called them Asterix and Obelix."
[On Gordievsky's job of trying to recruit Danish people as spies]  This new form of intelligence work was exciting but frustrating.  Danes are almost too nice to be spies, too honest to be subversive, and too polite to say so.  Every attempt to recruit a Dane bumped into an impenetrable wall of courtesy.  Even the most ardent Danish Communists balked at treachery.
The internal security system in Moscow Central was both complex and crude.  The most secret operational files were kept in a locked cabinet in the office of the department head.  But the other paperwork was retained in the various section offices, and in individual sages handles by the officers overseeing different aspect of the department's work.  Every evening, each officer locked his safes and filing cabinets, placed the keys in a small wooden box, and then sealed this with a lump of plasticine into which he pressed his individual stamp -- like the was seals used on ancient documents.  The duty officer then collected the boxes and placed them in another safe in Gennadi Titov's office.  That key was again placed in a small box, and sealed in the same way with the duty officer's stamp, before being deposited in the office of the secretariat of the First Chief Directorate, which was manned around the clock.  They system took up a great deal of time, and a lot of plasticine.
[In Moscow] It was easy to spot the KGB vehicles: the brushes of the KGB carwash, for reasons unknown, could not quite reach a spot in the middle of the hood, so each car had a telltale triangle of dirt on the front.