Summerbook #7: The Children of Húrin 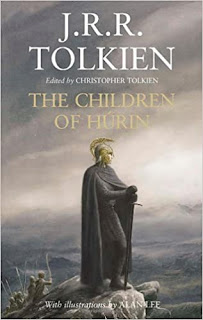 The Children of Húrin, by J. R. R. Tolkien/Christopher Tolkien
As these very pretty editions of tales, packed with Alan Lee illustrations, have been published, I've been tempted to read them, but I wasn't sure what order they went in or what exactly they were (stories from the Silmarillion...?), so it took me a little while to get around to it.  Christopher Tolkien explains in the notes that his father had written, variously, the bare bones of the Children of Húrin story, then a chunk of an enormous epic poem in the alliterative style of Anglo-Saxon poetry, and notes and versions.  The son then eventually kind of synthesized all of this material into something that would be readable and comprehensible to those of us not prepared to read several thousand lines of alliterative verse and still not know the end of the story.  So it's Tolkien's material, and Christopher's editing.  Three of the longer stories of the Elder Days have now been given this treatment, and I gather another is forthcoming.  I happened to read the first one first, to my surprise, so next I'll move on to Beren and Lúthien,...at least, if I ever get to go back to my workplace.
To my enormous surprise, I found out that the events in the Silmarillion, or at any rate before the Fall of Gondolin, take place not in the familiar landscape of LOTR, with the Shire and various kingdoms of Elves, Men, and Dwarves, but in a different area to the west that was flooded and lost when the Elder Days ended.  There are allusions to it in LOTR, in songs and such, but I really had no idea, which proves that I am not all that good at being a Tolkien fan.  So, I had to go find a really good map, and the best one I found is shown at the bottom of the post -- you can enlarge it.  The book has a fold-out map in the back, but it isn't really adequate; even some of the locations in the story are not pointed out.
The story centers on Húrin, his wife Morwen, and his children, mostly Túrin.  Húrin is a descendant of Beren One-Hand, and a great warrior and lord.  Morgoth, however, is gaining in power, and orcs are overrunning the land.  Húrin and his brother Huor go off to fight in a great battle, and Húrin survives -- but is taken captive by Morgoth, and tormented.  Húrin's children have a doom laid upon them that they will not be able to escape.
Túrin is Húrin's eldest child, an intelligent and serious boy, and his mother sends him to live with Elves for his protection.  There he grows to young manhood, and while he is strong and lovable, he is also proud and quick-tempered, traits which get him into trouble more than once.  Túrin's difficult and turbulent life lead him into many places, and he's always trying to escape himself by changing his name, yet inevitably his efforts and his heroism lead to ruin and disaster for those he loves.  At the last, he fights a great dragon, and also finds himself in the worst situation yet.
It's a story of fairly unremitting tragedy.  The children of Húrin make Oedipus look pretty lucky.  Of course, it's also beautifully written and fascinating in detail, so I recommend it; but prepare for a sad tale.
20 books of summer English literature SF/fantasy TBR challenge