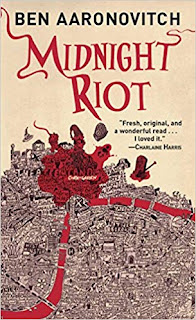 Accidentally, but appropriately, Summerbook #13 is the one with spooky magic!

I've been wanting to try this series out for a long time, but it's a British series that has not made a big appearance in the US.  So when I found a somewhat battered copy in the really neat SF/F used and new bookstore, Borderlands Books, in San Fransisco, on the evening that we went to the Chills concert (definitely one of the highlights of the year!).  Anyway, I saved it for a special fun read.

Peter Grant is a London constable, hoping to be a detective.  (We'd call him a rookie cop.)  He and his comrade Leslie start to look into a mysterious murder which seems to have been witnessed by...a ghost?  Soon Peter is swept into an unknown tiny branch of the Force that deals in supernatural crimes, headed by Inspector Nightingale, who is a wizard.  It will be Peter's job to learn magic -- lots of it -- and simultaneously negotiate with ticked-off river gods and goddesses.  And also find a ghostly serial killer who is getting more violent by the day.

This was a very fun story -- gripping, exciting, and well-planned.  I will definitely want to read more of these; Aaronovitch has built a solid basis for a series that will be half murder procedural and half wizardy magic.  CSI meets Gaiman's American Gods?  Of course, I'm quite late to the party; there are now six "Rivers of London" novels.

By the way, this is the second book by a British guy named Aaronovitch I've read this year.  I have to wonder: are they brothers?  Cousins?  Is Aaronovitch just a way more common name in the UK?  Fifteen seconds of research reveals that they are indeed brothers.  They have another brother who had a role on Coronation Street.  So, British Aaronovitches: a busy and public bunch.
20 books of summer SF/fantasy