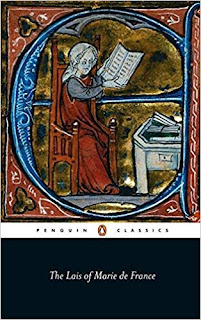 The Lais of Marie de France

I didn't know anything about Marie de France, and I wanted to find out, so here we go.  Marie is the earliest French woman poet we know of, and she was writing in the late 1100s.  It seems that she was born in France and then moved to England, and we do not know her real name.  She just said (in Old French) "My name is Marie, and I am from France," and that's what we've got.  Scholars have looked at several Maries of the day, but there is no certain identification.   She was almost certainly known at the court of Henry II and Eleanor of Aquitaine, and her poems were popular in  aristocratic social circles.

Marie wrote "lays," that is, narrative poems of a few hundred lines each, and they were based on Breton tales.  We have twelve of these stories.  The majority of them are about knights who fall in love with ladies, or vice-versa, and how they evade one or more spouses in order to carry on affairs.  One lay tells an episode in the story of Tristram and Iseut, and two others place their knights in the court of Arthur.

In Milun, a knight loves a maiden, which causes a different problem; the resulting baby has to be sent to an aunt in Northumbria to be raised secretly.  Years later, Milun and his unknown son nearly kill each other in single combat before discovering their relationship and finding Mom, whose husband has just conveniently died, so they all live happily ever after.

My very favorite story, however, is a little different.  In Bisclavret, the knight becomes a wolf for a few days a week, and when his wife learns his secret, she betrays him by getting another knight to hide his clothes.  Without his clothes, poor Bisclavret is unable to change back, and his wife marries the other knight.  The wolf meets the king out hunting, and is so polite and intelligent that he becomes a beloved pet.  A few years later, the king visits the knight and his wife, and Bisclavret leaps at her and bites off her nose.  She confesses her crime, and the clothes are brought to the wolf, but he does nothing until the chamberlain points out that he must be embarrassed and they should let him transform in privacy.  Bisclavret becomes a man again, and the traitorous couple settle far away, where many of their descendants "were born without noses and lived noseless."

Here's an odd bit out of Guigemar:


The lord who ruled over the city was a very old man whose wife was a lady of high birth.  She was noble, courtly, beautiful and wise, and he was exceedingly jealous, as befitted his nature, for all old men are jealous and hate to be cuckolded.  Such is the perversity of age.

Yes, so odd of him not to like being cheated on.  These are the problems you get when marriages are arranged without reference to the people involved...

I'm glad to have finally gotten around to reading these famous little stories.  They're not difficult or long, so they're a good introduction to medieval courtly literature.  I know romantic adultery was all the rage back in 1180, and since aristocrats didn't generally get to choose their spouses, love was not part of the deal.  But it's still not very fun to read about.  I liked the werewolf story, though.