Sixpence in Her Shoe 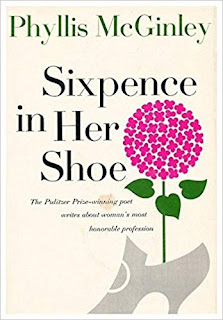 Sixpence in Her Shoe, by Phyllis McGinley

I don't actually know that much about the mid-century American poet Phyllis McGinley, except that she won a Pulitzer Prize.  And she wrote this book, which is about "the world's oldest profession," housewifery, specifically as practiced in modern America.  Three sections on Wife, House, and Family organize a selection of chapters/essays, many of which ran in the Ladies' Home Journal or other magazines in the 1950s, and were then collected and edited into a book in 1960.

McGinley's thesis here is that the domestic calling is an honorable one, not to be despised -- not even by intelligent and educated women -- which can be blended, or not, with a profession, as the individual woman prefers.  Every so often she is clearly rebutting Betty Friedan.

It's a fun and refreshing read.  McGinley is a witty, humorous writer, and I love reading books about housekeeping.  (I'm not quite so good at the actual housekeeping, but I'm improving!)  Essays discuss topics such as:
and many more.  The section on children was fascinating to read, because here she is in the 1950s complaining about exactly the same things that people are worried about today:  over-protected, over-scheduled children with too many toys and academic pressure put on children far too young.  My goodness, just think what she'd say now!

Phyllis McGinley clearly liked cooking a lot more than I do.  I got a little tired in the many chapters about the fun and creative art of cooking.

I enjoyed this book, and I think I'll read more about housekeeping soon.  I've been meaning to re-read the introduction to Home Comforts, which is one of the most inspiring housekeeping pieces I've ever read.  (My time is currently curtailed by rather a lot of actual house projects; we painted the hall and bathroom, got a bad piece of ceiling and a broken pocket door fixed, and there's one more project on the way.  That pocket door fix -- between the kitchen and the laundry room -- is very exciting; it broke years ago, the track was no longer available, this is the third or fourth guy to look at it, and he actually managed to fix it!  Yippee!  Finally, I don't have to listen to my washing machine any more!)