Summerbook #20: The Palm-Wine Drinkard and My Life in the Bush of Ghosts 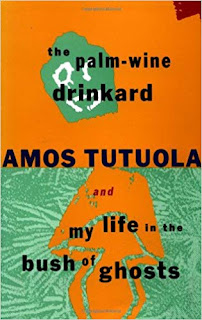 The Palm-Wine Drinkard and My Life in the Bush of Ghosts, by Amos Tutuola

Woohoo, I have done it!  I honestly did not think I would be able to finish 20 of the books on my list.  I added some extras, especially when I went off to Illinois and suddenly had access to new stuff, but I was hoping to get 20 from my actual list.  I finished on August 27, so about 6 days before the deadline.  Woot!  Well, on to our novel...

Amos Tutuola was born in 1920 in Nigeria; according to his account, he was a good student and had a great interest in his Yoruban culture's folktales.  He became a good storyteller in school, and so years later when he saw magazine ads for books of African tales, he realized he could do that too.  He wrote his first book, The Palm-Wine Drinkard and his Dead Palm-Wine Tapster in the Deads' Town, in a short span of time in 1946, but then wasn't sure what to do with it.  After seeing a magazine ad for a publisher that solicited manuscripts, he sent it off to them, and they (being a religious publishing house) passed it on to a more general outfit.  It was published in 1952 and quickly gained fame in the West, and mixed reviews at home.  Some thought the writing (which was in English) was embarrassingly ungrammatical and would reinforce stereotypes of primitive Africans --and some American reviews bore this out, although the first review, by Dylan Thomas, was enthusiastic and did much to promote it.  Others defended the language, pointing out that great writers mess with grammar and write in unusual styles all the time.

The story is that the narrator, right from a young age, loves to do nothing but drink palm wine.  His father gives him a palm farm and finds him a tapster, an expert who can produce lots of palm wine.  Everything is fine until the tapster dies, and the narrator can't find another one.  He goes looking.  Soon he meets a lovely girl who has seen a 'complete gentleman' in town and followed him to see where he lived -- despite his warning.  The gentleman returns all the body parts he borrowed until he is just a Skull, and keeps the girl in his house.  Together, the drinkard and the girl escape, marry, and set out on a long journey through the bush to find the town of Deads, to try to convince the dead tapster to work for the drinkard again.  They go through incredible adventures and ordeals on the way, meeting monsters and creatures of many kinds.

Tutuola then wrote My Life in the Bush of Ghosts, which I think is supposed to feature the same narrator, maybe.  Oddly, The Palm-Wine Drinkard refers to incidents in this story, even though it was written a few years later.  He must have already had this novel in his mind.  The narrator tells of his life as a little boy; his village is attacked by soldiers, and he and his brother run away.  They get separated, and he wanders off into the bush.  He then spends years meeting various kinds of ghosts, getting turned into different shapes (such as a cow, or a monster), and always trying to find his way back home.  My favorite were the smelling-ghosts, which smell horrible.

The novels are built on the basis of Yoruban cosmology, with many elements of tradition and folktale, but they are not collections of folktales retold.  They feel nightmarish and dreamlike, with odd transitions and strange events.   The language is unusual to Western ears, being like the idiomatic English spoken by young people in Nigeria in the 50s, and it's also wonderful to read, full of wit and interesting expressions.


...I was looking for a safe place to sleep. After a few minutes I saw a large tree which was near that place and there was a huge hole in its body which could contain a person. Not knowing that this hole was the home of an armless ghost who had been expelled from his town which belonged only to all the armless ghosts. When I entered this hole I travelled to a part of it which contained me, but it still went further, so I laid down and fell asleep at the same time, because I had no chance to sleep or rest once for all the time that I spent inside that pitcher. But when it was about twelve o’clock in the midnight this armless ghost who was the owner of the hole wanted to go out, of course, I did not know that somebody was living there before I entered.

I enjoyed reading both these novels, which are both quest stories, but based in a different kind of cosmology than I am used to.  The results are just really neat and intriguing.  The Palm-Wine Drinkard is also, of course, a landmark in African literature.

A funny note: just as I was nearly finished reading this book, I came upon a reference in an article to a 1981 album by Brian Eno and David Byrne titled "My Life in the Bush of Ghosts."  Although I like the Talking Heads, I wasn't familiar with this album.  I learned that it was innovative for featuring a lot of sampling, especially of African and Middle Eastern sounds, and I was disappointed to find that neither Eno or Byrne had actually read the novel; they just thought the title sounded great for their album.  Come on guys, you can do better than that!  I mean, really, don't you think that if you're going to name your album after a book, you ought to read the book?

Speaking of David Byrne, hearing his name always reminds me of this song, though this isn't my favorite recording of said song.  It is, however, the one available on the internet, and there isn't that much.  Check out "Northdakota Chrome" on the same album...

20 books of summer African literature read around the world