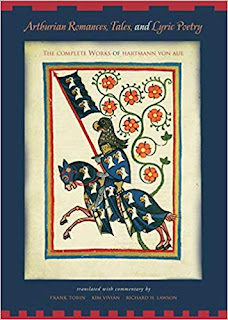 This is a long-held goal of mine, to read the complete works of Hartmann von Aue!  I did, some time ago, get hold of a (terrible) copy of Poor Heinrich, which is how I found out about this medieval German knight and poet.  I shall now quote my own blog post for background:


If you were here for my Arthurian literature project of 2014, you know that the mania for knightly romances and Arthurian tales spread through Western Europe in the 1100s.  I read French and German tales as well as English ones.  There were three great German poets of the courtly romance: Wolfram von Eschenbach wrote Parzival, and Gottfried von Strassburg wrote Tristan, but before them came Hartmann von Aue, who introduced the idea into Germany in the first place in the 1190s.  He has not become nearly as well-known in English as the two later poets...

This volume contains Hartmann's four narratives in presumed order of their composition: Erec, Gregorius, Poor Heinrich, and Iwein, but before that it has an early work, "The Lament," and a collection of lyrical poems.  I was really most interested in the romances, but I did read everything.

Erec and Iwein are both Arthurian tales retold from Chretien de Troyes' romances.  They were therefore familiar to me, but Hartmann put his own bits in too.

Gregorius is quite an interesting tale, an apocryphal saint's legend (like St. Christopher -- it was a very popular story, but disappointingly untrue).  Gregorius is, in fact, partially a version of Oedipus as far as I can tell.  A royal brother and sister are very fond of each other and eventually start an affair; the resulting child, Gregorius, is taken across the sea and fostered by a peasant, while the brother leaves, never to return, and the sister spends her life in penitence while she rules the kingdom.  Gregorius grows up and wishes to be a knight, and eventually ends up in his mother's castle; they fall in love and marry.  When the situation is discovered, Gregorius (who has become prideful) goes to a deserted island for his penance.  He stays on the island for 18 years, eating nothing and sustained by God.  Then some monks find him and he ends up Pope.

Thomas Mann eventually turned this story into a novel, The Good Sinner, in which Gregorius turns into a hedgehog during his time on the island.  I don't know why.

Here is my favorite quotation in the book, from Iwein, in an episode where Iwein causes a great storm to occur by pouring water on a certain rock.  This traditionally triggers a storm and a knight who comes out to defend his castle, but this time...


"...such a terrible storm that no one within the castle walls expected to survive.  Everyone was crying out, 'Damn the first settler of this land!  This suffering and disgrace is striking us at his whim.  This world has a lot of worthless places, but this is the very worst place ever to have a castle built on it.'"


So I was really happy to finally read all of Hartmann's works.  Also, I love the portrait of him on the cover, and am very tempted to put it on my wall somehow.  I just love how his eagles look like grumpy parrots and the crest on his helmet makes him look like a giant birdman on a horse.  His actual head is hard to find!  And his horse is so chipper!
20 books of summer Arthurian Challenge Germanic literature medieval