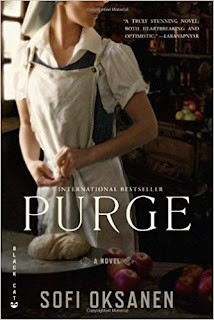 This was a pretty harrowing novel, folks.  It was interesting, and well-written, but I don't think I'll be revisiting it and it should maybe come with a warning on the cover.

Aliide Truu, an old woman, lives in her farmhouse on the edge of the Estonian forest.  It's 1992, and an unknown young woman shows up in front of her house.   Zara is running from the terrifying men who captured and trafficked her, but she also has a reason for searching out this particular house.

Neither of the women want to tell their stories, but they each need to find out who the other is.  The reader, meanwhile, is given access to chapters of their histories; Aliide remembers successive waves of German and Soviet occupation, her sister's marriage to the man Aliide loved, and just what she did to survive, and to get what she wanted.  Zara grew up in Vladivostok, surrounded by her mother's and grandmother's memories and fears.  When she wanted to earn money in the West for medical school, she fell into a trap, as did countless young women like her.  What are these two going to do in order to escape their pasts?

As I said, this is a difficult novel to read.  Oksanen is not pulling her punches and there are descriptions of what Zara is put through.  It's also, however, a story about some pieces of history that aren't very distant from us, but that are not well remembered.  So you might want to try it, but know what you're getting into.